Motorola is one of the only few manufactures to make a folding smartphone ready for purchase to the consumers. The company is now expected to launch the sequel to the 2019 Moto RAZR. It has been revealed that invitations have been sent to the September 9 launch; which is to announce the next-gen Moto RAZR foldable phone which may be known as the Moto RAZR 2020. Today, A labelled diagram of the upcoming Moto Razr 2020 has surfaced, likely from the AT&T branded phone’s user manual. 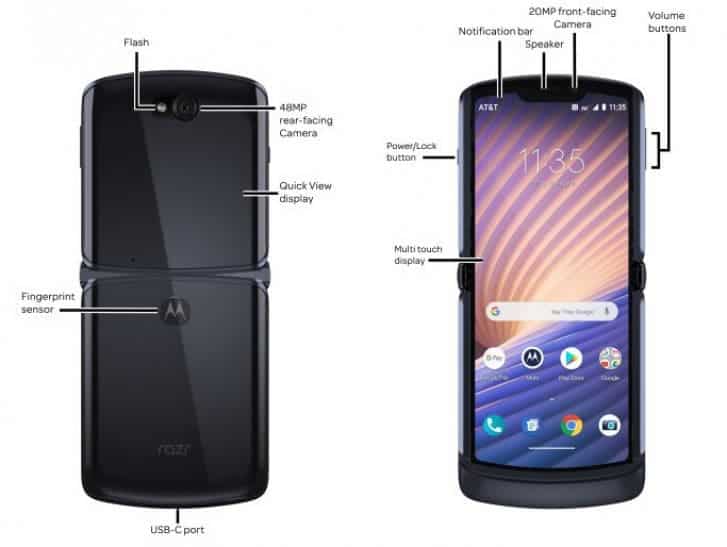 From the images, it can be noted that the power key has been placed on the left side of the phone; however the volume buttons on the upper right side. While the fingerprint sensor remains approximately in the same place, the Moto batwing logo will be the scanner this time though.

Interestingly, prior to this, there was a patent, showing the smartphone would integrate a foldable display and will have sensitive sides to the user’s touch. According to what is described by the patent; the lateral touch band would consist of several sensors capable of associating 20 different functions. In correspondence with the recognition of 20 different gestures. We mean the rounded edges shouldn’t be added on its own. They will have a certain function.

The Motorola RAZR 2 will ship with a Snapdragon 765G  chipset; coupled with 8GB of RAM and 256GB of native storage. The device itself is expected to come with a 6.2-inch flexible P-OLED internal display while the outer secondary screen is said to get a bump up to 2.7-inches. Motorola is also expected to upgrade the cameras on the RAZR with a 48MP sensor on the back and a 20MP selfie shooter under the notch upfront as opposed to 16MP and a 5MP on the predecessor respectively.

To recall, the Moto Razr 2019 comes packed with a 6.2-inch pOLED Flex View display having a resolution of 876 x 2142 pixels. It also has a wide notch along with an aspect ratio of 21:9. The secondary display, on the other hand, measures 2.7-inch with a 600 x 800 pixels resolution. The cover display can be used for numerous tasks such as scroll pad or viewfinder for selfies.

Under the hood, the foldable phone runs on Snapdragon 710 chipset paired with 6GB RAM. For optics, the device has a primary 16MP camera accompanied by a dual-LED flash. For selfies and video calling, there is a single 5MP front shooter. All of these are backed by a small 2,510mAh battery with 15W fast charging support. Other specifications include Android 9 Pie, Bluetooth 5.0, NFC, Type-C port for charging and e-SIM connectivity.
Source/VIA :
EVLeaks Twitter