There is no doubt that due to the impact of the pandemic, there have been a lot of adjustments in the gaming industry this year. Whether it is from parts procurement, transportation to parts manufacturing, everything is affected. This also includes the launch of the next-generation game console PlayStation 5. A recent trailer of “Call of Duty: Black Ops”, suggests that the Sony PS5 will first arrive in North America. 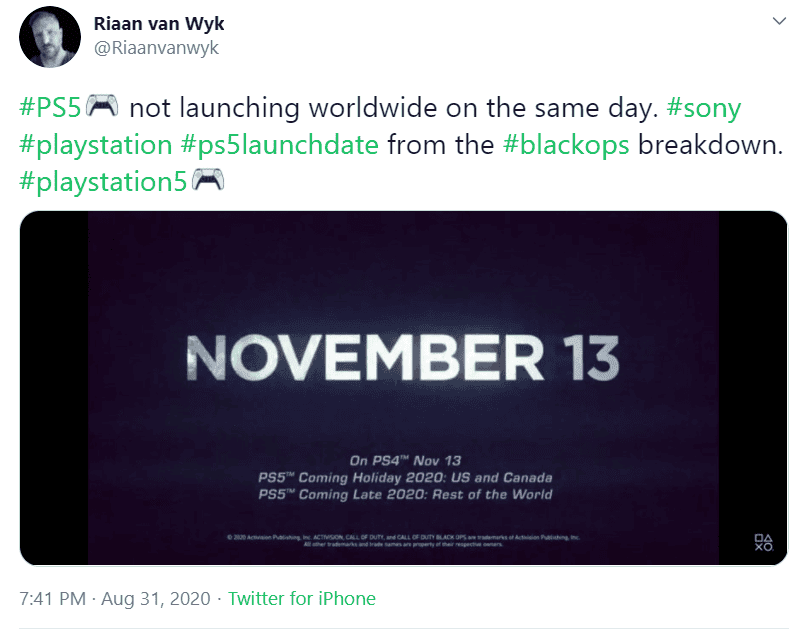 At the end of the trailer, there is a piece of information that says that “Call of Duty: Black Ops” will be on PS4 n November 13. For Sony PS5, the United States and Canada (North America) will have it on the holiday of 2020. However, PS5 in the rest of the world will get it late 2020. It is most unlikely that this schedule is due to the game itself. There are speculations that the “Call of Duty: Black Ops” release schedule is engineered by the availability of the console itself.

Traditionally, the “2020 holiday” refers to the time before Christmas. This basically refers to the fourth quarter of the calendar year (October to December). However, the “end of 2020” most likely means the last month of the year. This suggests that anytime from October, the PS5 can arrive in North America. However, for the rest of the world, its December for sure.

The current registration for PS5 pre-order is also limited to North America. Actually, you can register in just the U.S. and Canada. So the above speculation also makes sense.

However, this is just a simple extrapolation and interpretation of the “Call of Duty: Black Ops” release schedule. It may not be applicable to the Sony PS5 console at large. There is no official launch date for the PS5 for now. All we have is speculation. One thing we know for sure is that by December 2020, we will have the PS5 and XSX.