Qualcomm has a mouthful name for the new chipset – Qualcomm Snapdragon 8cx Gen 2 5G compute platform – The company is labeling this chip as Generation 2 as it’s a minor update over the original platform and does not feature any changes to the architecture. In other words, it still packs an Octa-Core CPU aligned in a 4+4 cluster configuration. It features four powerful ARM Cortex-A76 joined by four power-efficient Cortex-A55 cores.

The graphical tasks are ensured by the Adreno 680 Extreme which is nice since this is the company’s most powerful GPU until now. The new chipset packs Qualcomm 685 DSP and Qualcomm’s 4th gen AI Engine for 9 TOPS performance. Moreover, it comes with Spectra 390 ISP offering support for 4K HDR playback or video capture at 30FPS. Devices with it can include a 32MP camera with Zero Shutter Lag, or dual 16MP cameras with ZSL. The maximum supported display resolution is 4K. Users can enjoy 4K60 using an external display. It also brings some audio improvements like Hi-Fi audio with virtual surround sound, full hypervisor, Qualcomm Aqstic Echo-cancellation, and more.

This is a 7nm chipset fabricated on the FinFet process. According to the chipmaker, the system will perform 18% better on the newer chipset. The gain is bigger on productivity performance at a 39% margin. 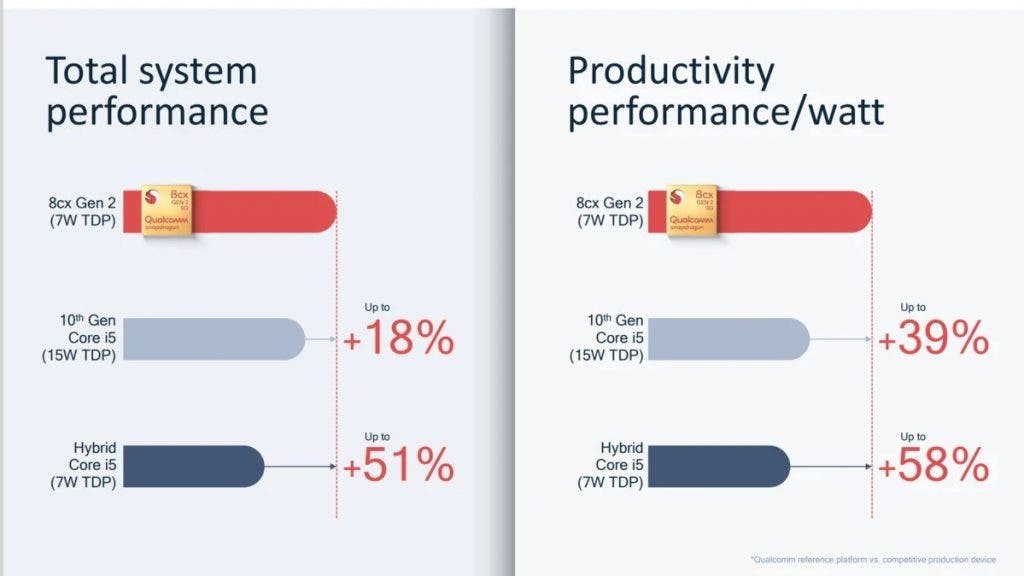 The new chipset comes with seamless support for Windows 10 Enterprise, which does not come as a surprise. As we’ve mentioned before, Microsoft stands as a key partner for Qualcomm’s ARM chipsets for PCs. In the same vein, Snapdragon 8cx platforms may be Microsoft’s best response for the upcoming ARM-powered MacBooks.

The biggest add-on in the second-gen chipset is Qualcomm’s FastConnect 6800 mobile connectivity sub-system. It brings support for Wi-Fi 6 and Bluetooth 5.1. Moreover, the company comes with a Snapdragon X24 modem for LTE and can also optionally support 5G NR when paired with the Snapdragon X55 modem-RF system. Qualcomm made the new platform ready for the fifth-gen network but is giving the OEMs the choice of using it or not. 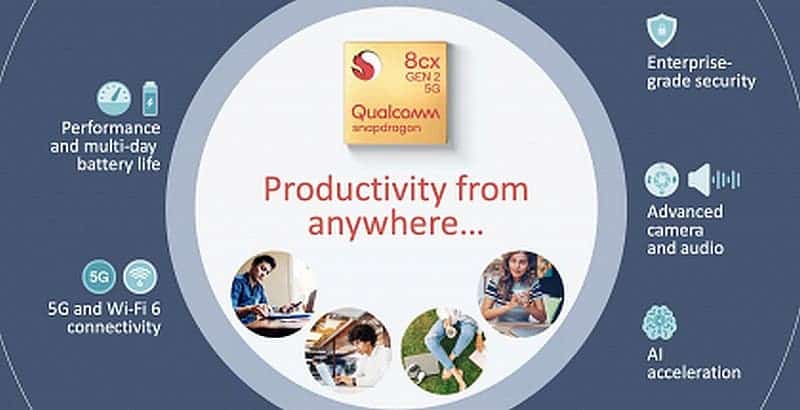 The company is sampling the new platform for customers right now. The first device with it may appear in the final quarter of 2020. Among the main partners, we expect to see new laptops coming from Microsoft, Samsung, and Lenovo. However, Acer is likely to join the trend soon with its first Windows on Snapdragon PC laptop.