Qualcomm announced that it will expand its 5G product portfolio to include its cheap version, the Snapdragon 4 series. According to the company, smartphones with this chip will arrive in 2021. Qualcomm also claims that it will bring faster network standards to the cheapest smartphone series to date. 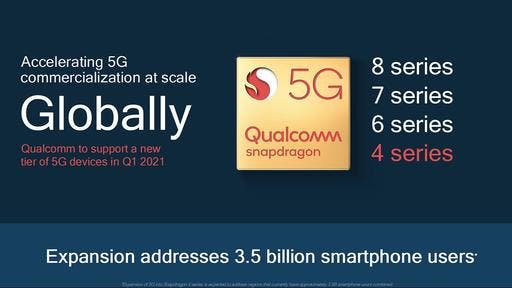 Qualcomm has been steadily expanding its list of compatible 5G chipsets. In 2019, Qualcomm’s flagship product Snapdragon 8 series mobile added 5G support. In 2020, the company will significantly expand the series. The current Snapdragon 865 series requires a separate 5G modem, but there are cheaper options in the Snapdragon 7 series and 6 series lineups. We have the likes of Snapdragon 765 and Snapdragon 690.

Qualcomm did not announce many details of the upcoming 5G compatible Snapdragon 4 series chips. The company did not say which modem it will use. It also did not reveal if this series will integrate a chipset or use an external baseband. Furthermore, we can not tell if it will support mmWave networks or only sub-6GHz networks.

More details on the upcoming Snapdragon 4 series 5G chips should appear soon. Qualcomm expects the first commercial phones to be released in the first quarter of 2021. Major companies such as Oppo, Xiaomi, and Motorola will launch 5G mobile phones with the new Snapdragon 4 series chipsets.

According to popular Weibo leakster, @手机片达人, Qualcomm and MediaTek will be launching 5G chips below $20. According to the report, the code-name of Qualcomm’s low-cost 5G chip may be sm4350. Furthermore, Qualcomm’s solution will reportedly arrive a quarter before MediaTek’s. This will give rise to a new price limit for 5G smartphones.

As of the beginning of last year when 5G first went commercial, we only had flagship 5G smartphones. These devices arrived with a price tag above $700 in most cases. However, as manufacturers continue to develop 5G, the average price of 5G smartphones in China is now about $464. Since the release of the MediaTek Dimensity 5G chips, there has been a preponderance of mid-range 5G smartphones. We currently have 5G phones that sell for about $300. However, with the current report, we will soon have $150 5G phones.