Although Huawei has still stuck in the end, the company did not suspend it. Various businesses are still in full swing. Say, we have been hearing various news concerning the company’s first desktop PC. And we have to say, regardless of its difficulties in the smartphone field, the upcoming Huawei PC has attracted much attention.

According to a Weibo blogger, the Huawei PC Kunpeng’s launch is not around the corner.  It turned out many companies have already tested it, especially enterprises and institutions. They started using it last year. Both desktops and all-in-ones have been in tests. 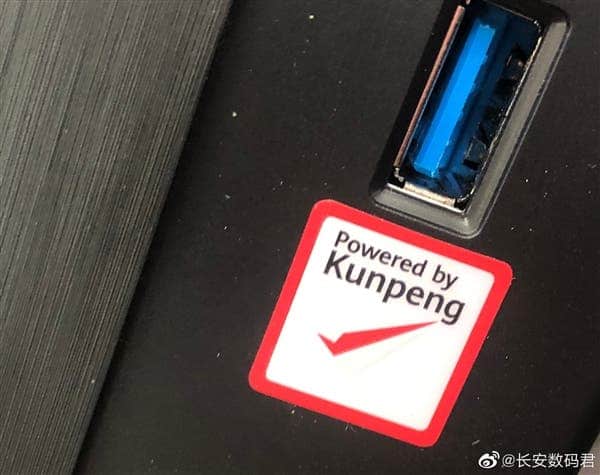 Besides the information he shared, the blogger also posted a partial spy photo of the Huawei PC (Kunpeng). It can be clearly seen that besides a blue USB 3.0 port, there is a sticker with ‘Powered By Kunpeng’ (why not in Chinese?).

The tipster claims that the Huawei Kunpeng PC has had a cooperation with more than 20 provinces, and the industrial chain and production line are also in full fire. It is expected that by the end of this year, all provinces in the country should have production bases and industrial chains.

Even more exciting is that the production of Kunpeng chips was not interrupted. This clearly indicates that the localization of the entire industrial chain and the production line has been opened up.

Regarding the Huawei Kunpeng PC, we have received leaks from many users. The information shows that the initial version uses a self-developed 24-core Kunpeng processor, an 8GB notebook memory, a 512GB Samsung SSD, and AMD’s Radeon 520 graphics card. In addition, the internal disclosure of this processor’s multi-core performance is slightly better than that of the i9-9900K. This desktop is exclusively for government and enterprise customers. It is equipped with a domestic UOS system and cannot install and run Windows.

Earlier, a Twitter tipster revealed almost everything concerning the Huawei Desktop. It adopts a simple and commercial design. There are three USB-A and one USB-C port and a headset port on the front. It can also come with an optical drive. The rear I/O panel has four USB-A interfaces, a network cable interface, and a VGA interface.