LG really is taking 2020 seriously. First of all, the company decided to kill its aging LG G-series in favor of a new refreshed design language in the form of LG Velvet. Just recently, the company unveiled the LG Wing which is, so far, the company’s most innovative handsets to the date with a swivelling display. However, the company knows that the market is made of more than “unusual” handsets or flagships. For that reason, it revealed a couple of new mid-range devices today for Latin America. Now, the company seems to be preparing a new mid-range phone dubbed LG W11. The device has made its way through Google Play Console which reveals some of its key specifications.

The new handset is paired with the MediaTek Helio P22 chipset. This is an aging chipset right now bringing eight Cortex-A53 cores to the table. It is enough for basic usage, but don’t expect it to be a gaming chipset. The Octa-Core SoC is paired with 3GB of RAM. We expect this handset to come in more than one flavor, for that reason a 2GB variant is not discarded. The chipset is paired with PowerVR GE8320 GPU clocked at 650MHz. 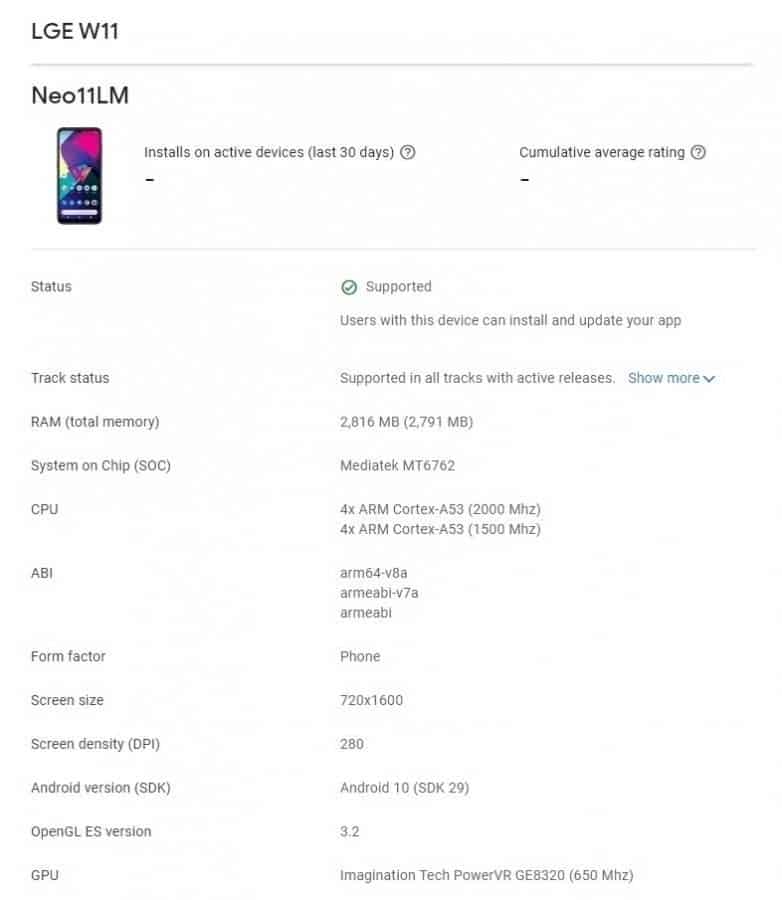 The handset comes with Neo11LM and despite the “K” model number, it will come with LG W11 marketing name. We don’t know the exact size of the display diagonal but will bring HD+ (1,600 x 720p) resolution with 20:9 aspect ratio and 280 ppi. The leaked listing reveals a waterdrop notch up to the top of the display serving as a house for the single selfie snapper.

The handset runs with Android 10 straight out of the box. It’s not a big surprise, and you can also expect LG UX to be running atop. Worth noting, that a similar device already appeared on Google Play Listing with model number LG-K310IM. This device was certified in August with a 3,900mAh battery. Perhaps LG is preparing this handset and will launch it with different names in distinct markets. A couple of weeks ago, a device surfaced rumored as LG K31s. Perhaps, it will not be released as K31s but LG W11.

The phone will also have 32GB of Internal Storage and a 3.5mm headphone jack will complete the package. Unfortunately, users will have to deal with the aging micro-USB port.

Next Microsoft acquires Bethesda and its studios for $7.5 Billion