HMD is gearing up to reveal a set of new Nokia smartphones in the last quarter of 2020. The company had to postpone several of its devices due to the COVID-19 pandemic that greatly impacted the smartphone industry and overall economy during the first quarters of 2020. The company recently released new feature phones and mid-range devices this month, now it seems to have another device in tow. Today, a new Nokia smartphone bearing model number TA-1354 passed through Thailand’s NBTC certification process. Unfortunately, we still have no clue about the actual marketing name of this device. However, its certification was applied by YA Sales Service Co. Ltd. It’s an authorized distributor of Nokia Mobiles.

Unfortunately, NBTC does not tend to bring more than a few details about a particular handset. Apart from the network bands supported by the handset, there’s nothing more to write about. Worth noting, that tomorrow, Nokia will be holding a virtual event where it is likely to bring new smartphones and feature phones. According to rumors, the company will unveil the Nokia 3.4, Nokia 6, and 7.3 smartphones tomorrow. 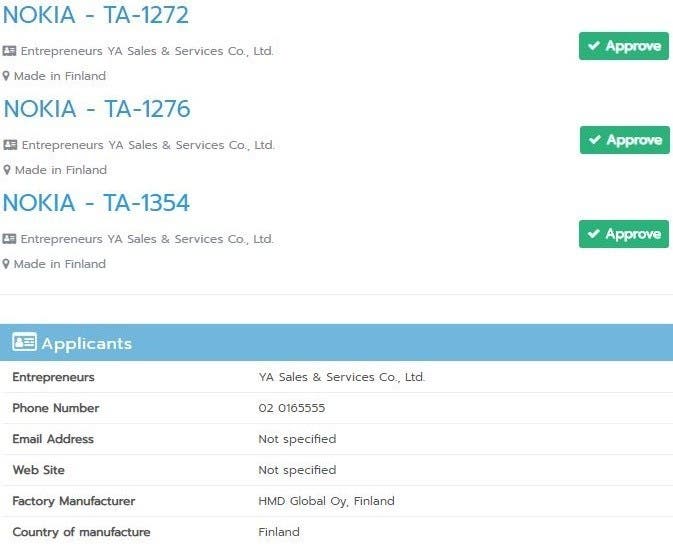 Worth noting that yesterday, two additional devices were spotted at the very same place, the TA-1272, and TA-1276. Out of the three, the Nokia 1354 is the device with more network bands. That said, we’re talking about three 4G smartphones as none of them brings any of the usual 5G network bands.

While Nokia seems to be ready for unveiling a bunch of new mid-range phones, all the company’s enthusiasts still wait for a proper flagship. This device is set to come in the form of the long-rumored Nokia 9.3 PureView. According to rumors, the company’s smartphone will be the second device to reach the market with an under-display fingerprint scanner. It likely comes with an OLED matrix and an in-display fingerprint scanner.

The phone will pack a Penta-camera setup with a ZEISS lens. We expect a massive primary camera along with a width sensor a telephoto lens. The devices promise to pack one of the most reliable camera sensors in the market.

Now an important part is a performance. While no much is known about the handsets specifications, we expect it to bring the Snapdragon 865 at the very least. The first PureView failed with an unreliable camera and an outdated chipset.

Perhaps Nokia will bring a teaser for the flagship at tomorrow’s event.

Next LG W11 appears on Google Play Listing, It's the real name of the LG K31s