Oppo seems to be working on a new smartphone dubbed Oppo A33 (2020). As the name suggests, the A33 (2020) is the refreshed version of the original smartphone that was launched back in 2015.  The device has now appeared on Thailand’s NBTC certification. Just like with most listing, this one too reveals some key specs and features along the way. Apart from NBTC, the device has also received Indonesia’s TKDN and India’s BIS certification. 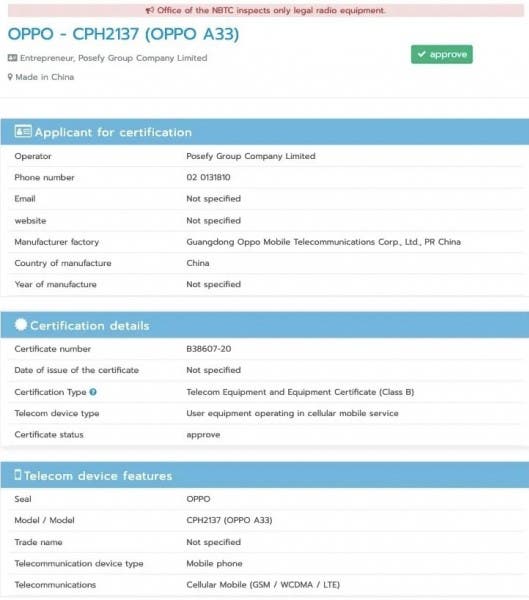 According to the new listing, the upcoming Oppo A33 (2020) smartphone bears the model number CPH2137. The device will support an LTE connectivity and that makes sense considering it is going to be a budget offering. Since we’re looking at the early leaks, there is very limited information surrounding the smartphone. We expect more information to come forward in the coming days or weeks.

To recall, the original Oppo A33 features a smaller 5-inch IPS LCD panel with a resolution of 960 x 540 pixels. Under the hood, the phone runs on Snapdragon 410 chipset paired with 2GB RAM and 16GB built-in storage. There is a single 8MP primary sensor along with an LED flash located on the back while there is a 5MP front snapper on the front for selfies and video calling. Powered by a 2,400 mAh battery, the device comes with standard charging capabilities. All these specs and features were quite common back in those days.

With that said, the 2020 version should follow all the latest ongoing trends such as quad camera, punch-hole cutout, powerful chipsets, and of course, fast charging.