All the fuss about the Xbox Series X and Sony PS5 is slowing coming to an end. However, the “real” fuss will commence after users start getting their consoles. Both the Xbox Series X and Sony PS5 are currently on pre-order and users can wait to get their console. However, there is news that you may not like to hear. If you pre-ordered this device from Amazon, you may not get it on the launch date. 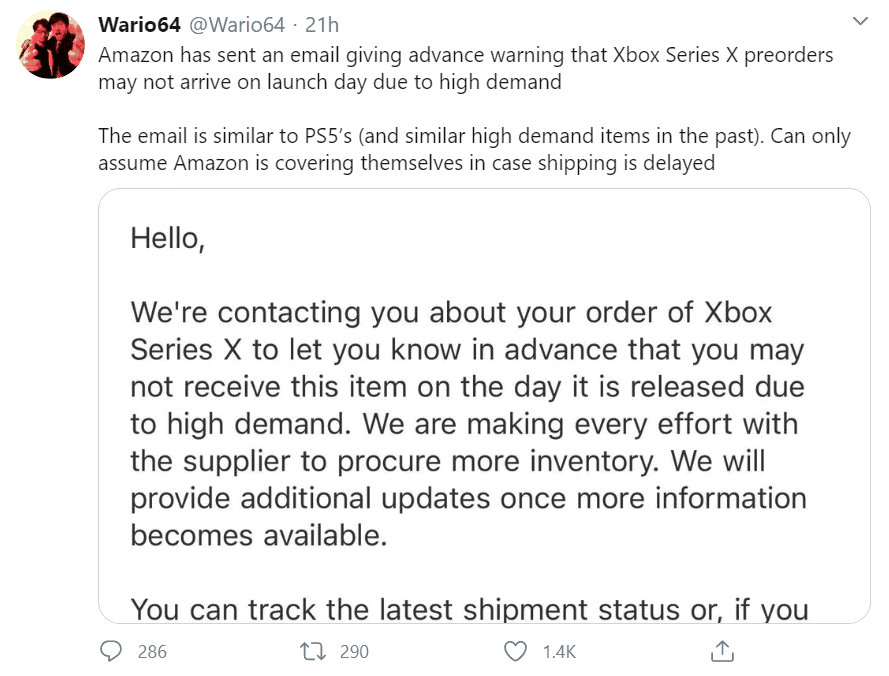 Last week, Amazon notified those customers who have pre-ordered PS5 that they might not get the game console on the release day. Now, according to information on Twitter, Amazon is also telling those who have ordered the Xbox Series X the same story. The main reason for the slow shipping is due to “high demand”. Truthfully, both the PS5 and Xbox Series X are in high demand.

Amazon’s notification reads: “We are contacting you about your order of Xbox Series X to let you know in advance that you may not receive this item on the day it is released due to high demand…”. Unfortunately, the mail did not state how long buyers will have to wait to get their device.

Microsoft recently commenced pre-orders for two next-generation consoles XSX/S in some markets. The two new products appeared in multiple markets and sold out after a few minutes. Microsoft said that XSX/S reservations broke its historical record. While being excited, it apologized for consumers who did not grab it. The two new consoles will be officially launched on November 10.