We have to say that Lenovo does not seem to be the most appealing smartphone maker lately. Apparently, the company is pretty much comfortable with the sells of its Motorola division that is not so stressed in pushing Lenovo-branded devices. However, there still space for some Lenovo low-end devices to come. A new smartphone with the Lenovo A8 moniker was spotted on the GeekBench benchmark. The device came with low to mid-range specifications and Android 10 in tow.

According to GeekBench, the model in question is the Lenovo L10041. In fact, this device has been already spotted on multiple certification authorities. It already made its way through Thailand’s NBTC, IMDA, and TUV Rheinland. Now, the device has passed through the popular benchmarking platform which reveals some of the specifications.

The Lenovo A8 or L10041 backs a 2.0GHz Octa-Core, the MediaTek Helio P22 SoC which brings eight Cortex-A53 cores to the table. The chipset power is paired with 4GB of RAM which seems to be adequate for most tasks nowadays. The phone has Android 10 OS in tow, which is not a big surprise since the new OS is mandatory for all devices launching this year. 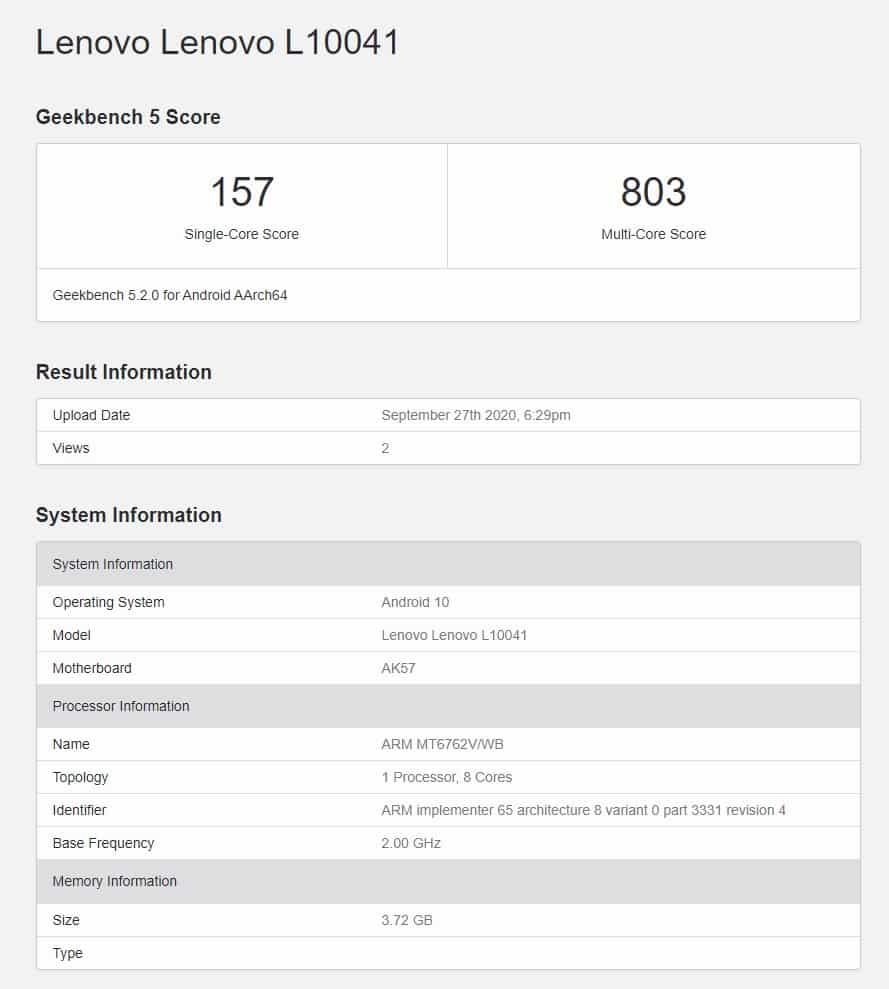 The device score 157 points in the single-core test and 803 points in the Multi-Core department. This chipset should be enough to ensure basic usage, but we don’t expect it to run modern games without any stress. Despite the device’s low capabilities it’s good to see that Lenovo is being generous in the RAM department. There are still a dozen of low-end smartphone that still come with just 2GB of RAM. Of course, this should change in November when Google will require all devices with 2GB of RAM to come with Android Go, instead of full-fledged Android.

According to TUV Rheiland, the smartphone comes with a 5,000mAh battery which seems to follow nowadays good standards. Unfortunately, this battery is combined with 10W charging. This limited capability suggests that an old micro-USB port is coming with the handset. Thailand’s NBTC also confirms 4G connectivity, which is not a big surprise. Lenovo is yet to give official details about the handset, but we expect it to happen in the coming days.

The device probably comes with a large HD+ display and at least two cameras on the back. The multiple certifications also suggest Global availability for this handset.