Samsung is running to bring more affordable smartphones with 5G connectivity. In fact, the company wants to bring 5G connectivity to its Galaxy A-lineup. The first step was given with the Galaxy A51 5G, and now the company is moving on to release a Galaxy A42 5G smartphone. Earlier this month, the company announced the Galaxy A42. At the same event, it gave us a glimpse of the upcoming variant with 5G connectivity. Until now the device’s design has been kept a mystery. Today, a set of high-quality renders of the Samsung Galaxy A42 5G have surfaced on the web. It confirms the punch-hole display and Quad-Rear camera setup.

The Galaxy A42 5G will pack a massive 6.6-inch AMOLED panel with a waterdrop notch serving as a house for the selfie snapper. The panel has an FHD+ resolution and that’s pretty much a standard among these devices. The handset will come with an in-display fingerprint scanner as the leaked renders do not show a visible scanner. 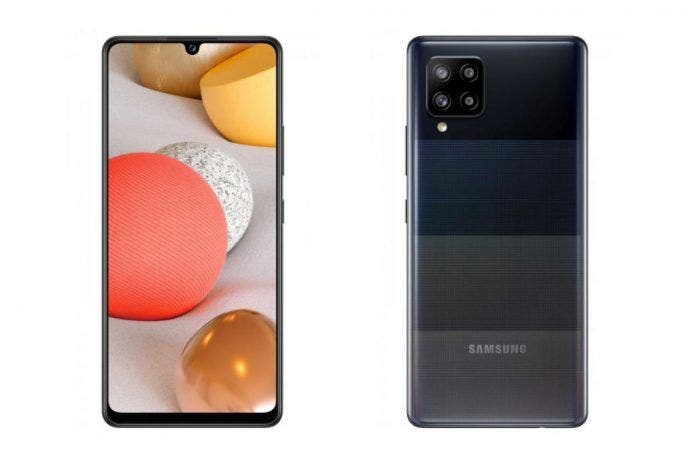 According to the GeekBench score, the handset packs the Qualcomm Snapdragon 750G SoC. It scored 615 points in the single-core test and 1,799 points in the multi-core department. In terms of graphics, this SoC brings the Adreno 619 GPU which can run most of Play Store games without any hassle. This brand new chipset brings some interesting features like Wi-Fi 6 support.

According to GeekBench listing, the phone has at least one variant with 4GB of RAM. We assume that there will be other variants with more RAM. The Samsung Galaxy A42 5G will bring a Quad-Camera setup with a squircle alignment. Unfortunately, not much is known about these cameras right now. But we would not be surprised to see a 64MP ISOCELL GW1 snapper or a 48MP unit at least.

The handset draws power from a 5,000mAh battery and we can expect at least 18W fast-charging. On the software front, the new smartphone will bring Android 10 OS with One UI skin running atop. The device may arrive in October and we assume that Samsung will be disclosing more details about building anticipation in the coming days. Interestingly enough, the device already received BIS certification, so it may see an India release as well. And that is really interesting, after all, some companies are neglecting 5G smartphones in India due to the lack of proper networks.