Few doubted that Huawei will not be able to maintain its leadership in the smartphone market for a long time and its sales will go to a steep peak. And these forecasts are already confirmed in the latest report of the specialists of Counterpoint Technology Market Research on the results of August.

Samsung and Xiaomi strengthen their position while Huawei falls 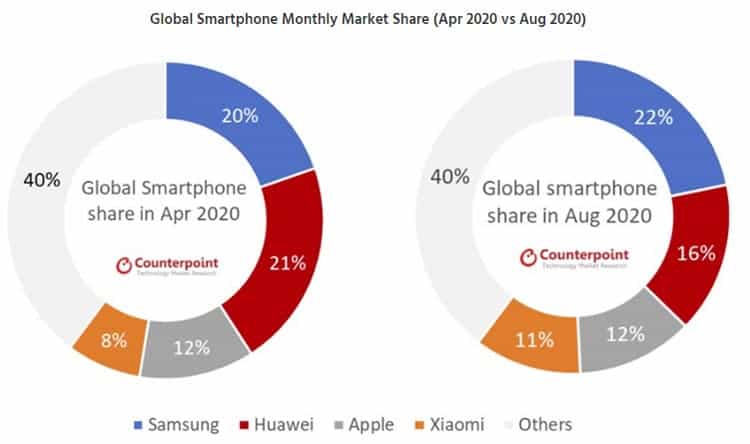 At the end of August, Huawei’s share in the smartphone market was 16% against 21% in April of this year (the Chinese company was the number one manufacturer at that time). The fall of Huawei allowed Samsung to regain its leadership, and it controls 22% of the mobile device market share.

Among the top three, we still have Apple, and its share was 12%. The fourth-place went to Xiaomi with 11% against 8% in April. Experts believe that the fall of Huawei will only continue and next year it will drop to the seventh position in the ranking of the largest smartphone manufacturers. The weakening of the Chinese company will be a good thing for its competitors, who will be able to improve their position in the market.

It is likely that at the end of the fourth quarter, Apple’s share will increase and spur demand for its products with the release of the iPhone 12 line. Despite the criticisms of the users due to the lack of innovation and the removal of the charger from the delivery box, there are many who will buy the iPhone 12.

This optimism and such indicators are especially interesting in light of the fact that the company reported a 56% decrease in profits throughout the year. Samsung did not specify the reason for such results, but, most likely, the growth is because of the high demand for the company’s products.

Previous Samsung Galaxy S21 will debut ahead of schedule