Samsung may be done with its flagships for the year 2020 after the release of the Note 20 series, Galaxy Z Fold 2, and Galaxy S20 FE. However, the company will keep expanding its low-end and mid-range portfolio even during Q4 2020. Interestingly enough, the company seems to be moving on to the release of two new super-budget devices for its Galaxy A and M-series. A couple of months ago, the company introduced the Galaxy A01 and M01 as two super budget smartphones. Now, there are pieces of evidence that the company is preparing the Galaxy A02 and Galaxy M02 for a release in the coming weeks.

A couple of days ago, two devices bearing model codes SM-A025F and SM-M025F appeared on NEMKO’s website. As their model names suggest, we’re probably seeing the first clues about Galaxy A02 and M02 existence. Now, both devices have been certified by the Bluetooth SIG agency. This hints that Samsung is indeed running to release them in the coming weeks. Unfortunately, Bluetooth SIG isn’t known for being a very revealing certification. 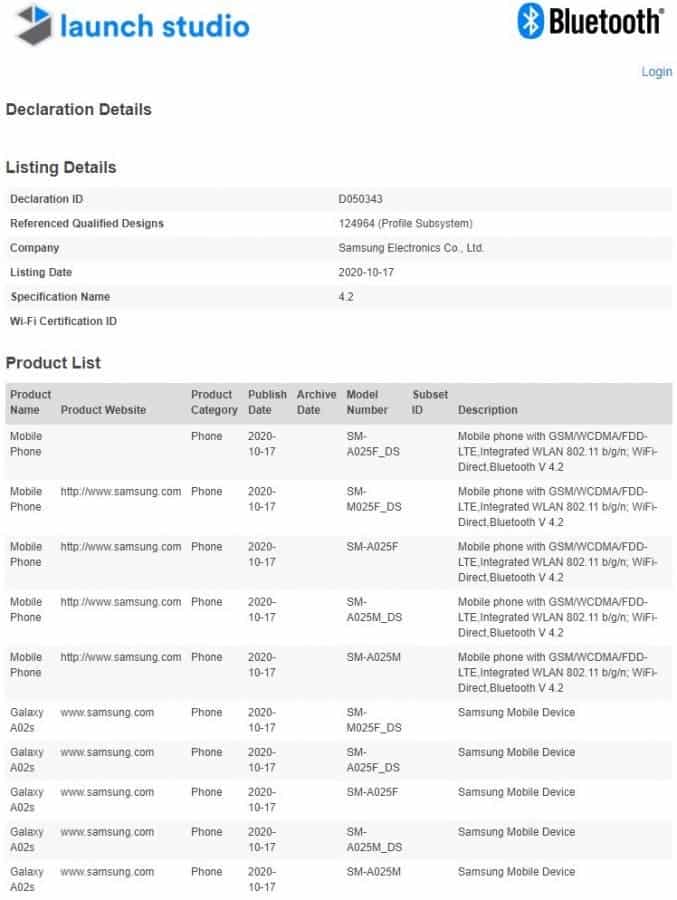 The Galaxy A02 or SM-A025F was spotted on Geekbench not long ago. It boasts an unnamed Qualcomm chipset, Android 10, and 2GB of RAM. We assume that it may be any of the Snapdragon 4xx chipsets, but not the most recent Snapdragon 460. The most plausible choice is the Snapdragon 450 SoC that despite its age is a capable Octa-Core chipset with eight Cortex-A53 cores. According to rumors, the handset will sport a 5.7-inch HD+ display with a waterdrop notch serving as a house for the 8MP selfie snapper. On the back, we should have 13MP primary and 2MP depth sensors. The device will have One UI 2.x and will draw power from a 3,500mAh battery. We expect an old micro-USB port making a comeback here.

Unfortunately, there are not many details or rumors pointing to the specifications of the Galaxy M02. However, we assume that it will be slightly inferior to the Galaxy A02. After all, the Galaxy M-series brings cost-effective and low-end handsets. Of course, Bluetooth SIG is huge proof that the handset is coming soon, so we will probably hear more about it in the coming days.

As usual, there’s still no word from Samsung about the duo of entry-level smartphones. But if these devices are coming on Q4 2020, the teaser campaign will likely start in the coming weeks.