Honor is all set to unveil its sixth iteration of fitness band dubbed Honor Band 6 in its homeland i.e. China. The all-new fitness tracker will succeed in the previous-gen Honor Band 5 that was launched alongside the Honor 9X lineup. Earlier today, Huawei’s sub-brand Honor went on its official Weibo account to announce the new fitness band.

According to the post, the upcoming Honor Band 6 will see its official unveiling on November 3 i.e. the coming Tuesday. To make the announcement, the Chinese smartphone maker has posted the very first teaser of the upcoming wearable. In the post, Honor claims that the fitness band will make a “new era of full-screen wearables” and “this time it will be different”. In the teaser poster, you can also see a full-screen design 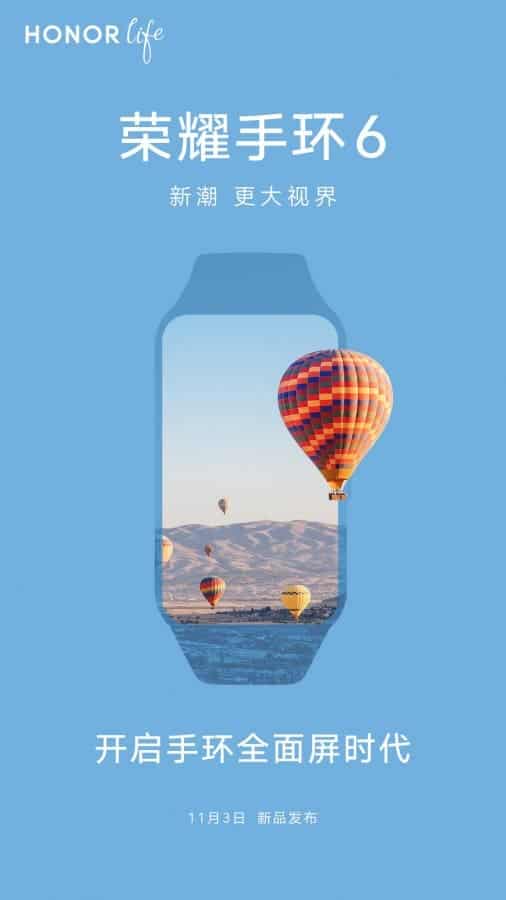 At the time of writing this, we have very little information about the Honor Band 6. According to a few reports, the upcoming Band 6 will have a large display increasing the threshold of a 1-inch diagonal. We’re also expecting a bigger battery this time around. The official launch event still has a couple of days left so we might see more teasers uncovering new things about the product.

Honor Band 5 managed to strike a perfect balance by offering a fitness band with all the basic tracking features, a lightweight and good looking design. All of these were packed at an affordable price making it a solid competitor of Mi Band 4. With that said, it would be interesting to see the pricing of Honor Band 6 considering it will offer a full-screen display panel.

Apart from Honor, Huawei (the parent company) is also planning to launch its next iteration of fitness tracker. Yes! we’re talking about the Huawei Band 5. As of now, there is no concrete launch date for the wearable. Considering a few reports, the launch should happen somewhere in the month of November. Earlier this year, Huawei brought its current offering i.e. Huawei Band 4 to the Indian market at an affordable price tag. It would be interesting to see whether Huawei’s offering will also feature the Full-Screen design or not.

Next HMD's new flagship (Nokia 10?) may arrive with a Snapdragon 875 chip