Earlier this month, OnePlus finally took the wraps off the OnePlus 8T as the mid-brother of its 2020 flagship series. For OnePlus releasing special edition smartphones aren’t something new. The company started with the OnePlus 5T Star Wars Edition, we had an OnePlus 6 Marvel Avengers edition, and then, the company moved to the McLaren Edition smartphones. This year, however, the partnership with McLaren came to an end. For that reason, OnePlus had to pick a new partner. All of sudden, the company announced a partnership with CD Project Red to launch an OnePlus 8T Cyberpunk 2077 edition. For those unaware, Cyberpunk 2077 is a promising futuristic RPG game coming for Consoles and PCs. The game has been delayed to December, but the OnePlus 8T CP 2077 edition will still come on schedule. 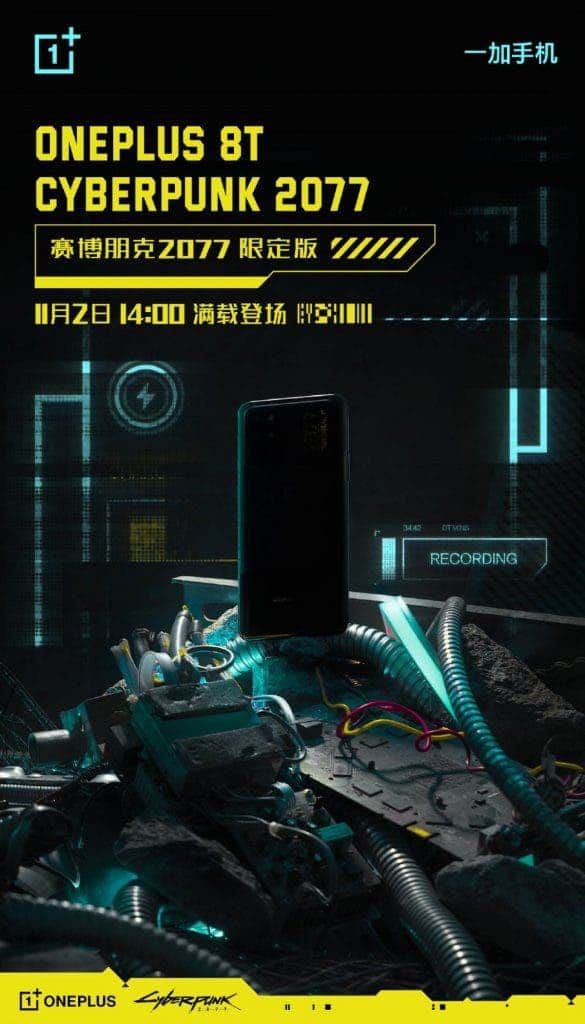 According to the Chinese company, the OnePlus 8T featuring Cyberpunk 2077 label will come on November 2. It’s more than just a phone with a special edition name on it. It comes with a slightly modified camera island on the back. So OnePlus has really put some efforts to make this a limited handset with a unique design. The phone is also expected to come with a custom theme, just like other cross-branding partnerships between OnePlus and other firms. The teaser image suggests the rectangle on the back is getting extra wide in order to incorporate the “2077” logo. Apart from the different designs, we’re probably looking at the same specifications.

We expect a super special retail box and a set of Cyberpunk 2077 cases.

The OnePlus 8T Cyberpunk 2077 edition should keep most of its specifications. That includes the 6.55-inch AMOLED display with FHD+ resolution and 120Hz refresh rate. The panel has a tiny punch-hole in the top left corner housing the 16MP selfie snapper. Moving around to the rear the device may pack the same 48MP primary, 16MP ultra-wide, 5MP macro, and a 2MP depth sensor.

Under the hood, we have the Snapdragon 865 SoC. It was a little weird to not see the latest Snapdragon 865 Plus on an OnePlus T flagship, but well, the Snapdragon 865 still reigns as a powerful chipset. The OnePlus 8T draws power from a 4,500mAh battery and debuts the OnePlus 65W fast-charging standard. In fact, the charging tech is what makes the OP8T stand against its two brothers that are limited to 30W charging. Last but not least, the phone is the first OnePlus flagship to ship with OxygenOS 11 based on Android 11.

Previous Canalys: Samsung has kept its domain in the smartphone market