Qualcomm is getting ready to announced its new flagship chip, Snapdragon 875 SoC. According to popular Weibo leakster, @DigitalChatStation, he recently had access to the second engineering model of the Snapdragon 875. The code name of this chip is “Lahaina”. Lahaina is the largest census-designated place in West Maui, Maui County, Hawaii. Recall that Qualcomm previously announced that it will hold a Snapdragon chip conference in Hawaii in December. 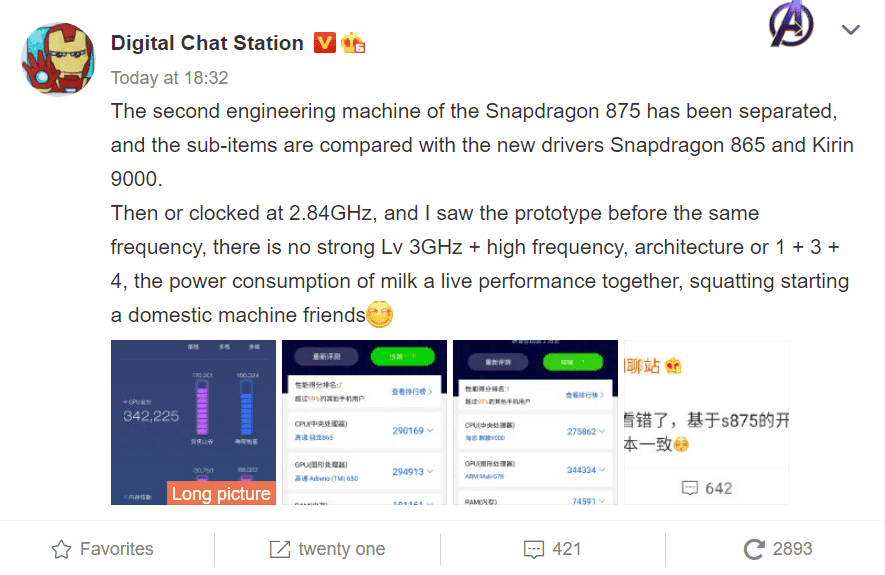 The images on his recent Weibo post has the running scores of the Snapdragon 875 processor. In addition to the running score, we can see that the main frequency of this chip is around 2.84GHz. The total score of CPU is 333269 while that of the GPU is 342225.

Nevertheless, it is important to note that these figures can not be used as an actual comparative standard. This is because the Snapdragon875 is only an engineering model. It is possible for us to have a significant difference when the final product hits the market.

The chip is based on a 5nm process and adopts a “1+3+4” eight-core design, of which “1” is the super-large core Cortex X1, and its peak performance is 23% higher than that of the Cortex A78. It can be called a “super-large core” in the true sense.

The AnTuTu score of the SD875 shows that it is about 25% better than the SD865. Of course, all expected the Snapdragon 875 SoC to be better but we didn’t think that it will be a huge jump. According to the AnTuTu benchmark, the Snapdragon875 scores 847,868 points. It is not just impressive but unbelievable. For a comparison, Snapdragon 865 scores 663,000 points. The difference between the Snapdragon 865 and 875 about 184,000 points. It is not common to see a difference this big after just one generation. Hence, it’s a big jump for Qualcomm and this will be a good selling point for this chip.

Previous Honor V40 Series Will Debut In Mid-December, Coming With Dimensity 1000+ and Kirin 9000

Dimensity 2000 will do battle with Snapdragon 898 SoC