Meizu once was one of the most notable Chinese smartphone makers but lost space in the past few years. The company lost a solid margin in the global markets and in China. The Chinese firm failed to deal with the competition and struggled to deliver proper software support for its customers. Despite this, the company has kept its investment in the flagship segment. This year, we had the Meizu 17 series, however, the devices arrived amidst the COVID-19 pandemic in Europe. Since then, we haven’t heard much about Meizu. Now, a new fresh leak revealed some of the specifications of an upcoming flagship dubbed Meizu 18 Max 5G. It looks promising with Qualcomm Snapdragon 875 and 120W fast-charging technology. 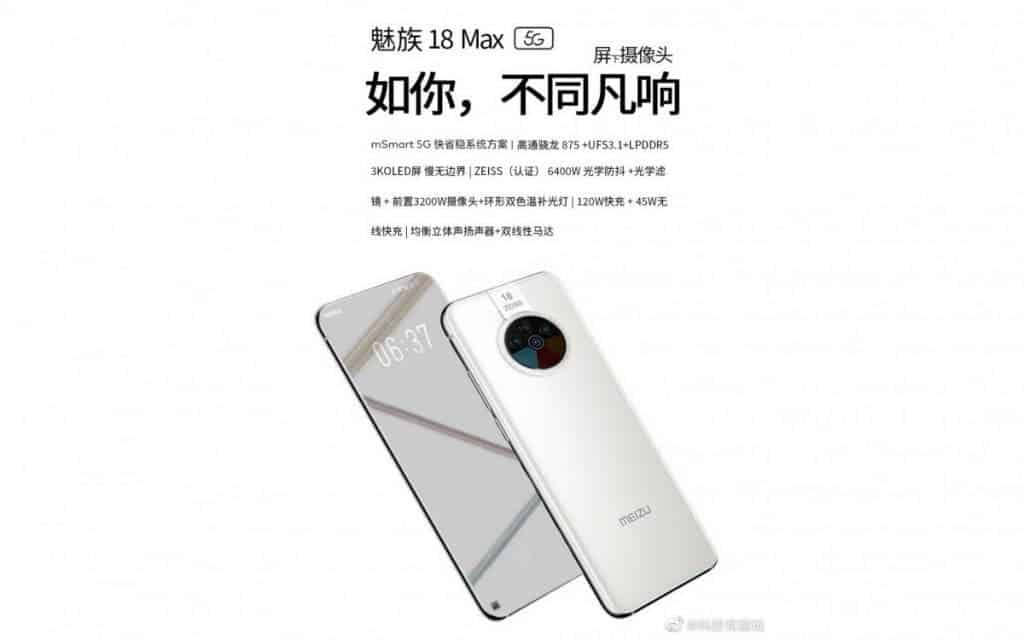 According to the leak, the new flagship dubbed Meizu 18 Max will pack Qualcomm’s Snapdragon 875 SoC. The new chipset will be based on the 5nm manufacturing process and will have an Octa-Core architecture with at least one powerful Cortex-X1 core. This particular core will bring an impressive boost in performance. It is 22% faster than the Cortex-A78 and 30% better than devices with Cortex-A77 cores. Apart from the promising next-gen chipset, the phone will pack UFS 3.1 Storage and LPDDR5 RAM. According to the leaks, this is a flagship that brings everything we expect on a 2021 phone.

Even the display is promising, according to the leak, we will have a 3K OLED display. This panel does not have punch-holes, notches, or bezels for the 31MP selfie camera. Apparently, Meizu will be the second Chinese company to jump in the in-display camera selfie trend. On the back, the device comprises a 64MP main camera with a ZEISS lens. We have a circular camera shape here. The leaked image also reveals the whopping 120W fast-charging technology. This is for wired charging, when it comes to wireless charging capabilities, the devices also impress with 45W wireless charging support. For a quick comparison, the Meizu 17 brings just 30W wired-charging and 27 wireless charging. Other rumored specifications include dual stereo speakers (The earpiece should act as a secondary speaker), dual linear vibration motor for gaming. The latter feature is something that Meizu has been proud of since the release of the Meizu 17 series. Hopefully, the phone will ship with Android 11 straight out of the box, and of course, an updated version of FlymeOS running above.

Of course, we should take this leaked image with a pinch or two of salt. The device looks promising, and it’s quite unexpected to see this amount of promising specs coming from Meizu. After all, the company isn’t in the best of its days anymore. It may be a little soon to hear more about this device, but we’ll keep our eyes open for more news about it.