Yesterday, a new Xiaomi device with Snapdragon 875 chipset visited GeekBench. Well, that’s not the only device that happens to get its benchmarking. We’re now looking at the unknown Realme smartphone with the model number RMX2194. The device appeared on GeekBench listing for benchmarking purposes. As expected, the listing has now revealed key specs of the device along the way.

The unknown Realme smartphone has appeared on the listing with a Qualcomm Snapdragon chipset having the motherboard mentioned as “Bengal”. For those who’re unaware, the motherboard point towards the Snapdragon 460 chipset. The SoC is paired with 4GB RAM and the device runs on the Android 10 operating system. Coming to the benchmark scores, the unknown Realme device managed to score 254 points in single-core performance while it bagged 1171 scores in the multi-core test. 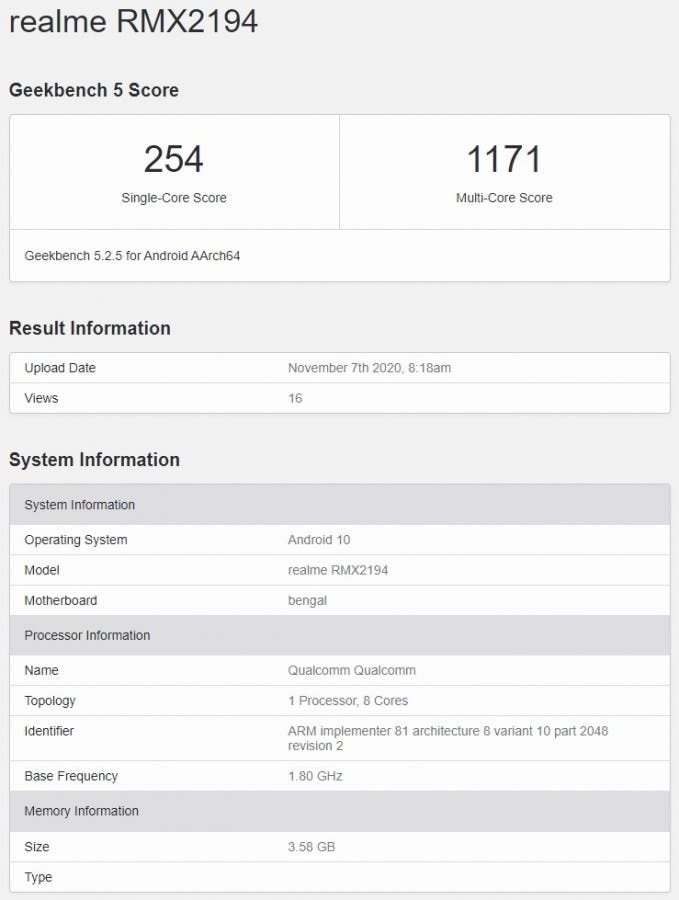 Apart from this, the GeekBench listing hasn’t really revealed much about the upcoming Realme smartphone. To recall, the Chinese smartphone maker currently only has two devices running the Snapdragon 460 chipset. We’re talking about C17 and C15 Qualcomm Edition. Both of them are the budget-focused smartphone so we’re expecting the Realme RMX2194 to be the same as well. Considering the model number, it is safe to assume that the RMX2914 could be the company’s upcoming C-series device.

Since the device has now managed to arrive on GeekBench listing, we’re expecting more such certifications and listing to surface. Whenever that happens, we will surely come to know more about the smartphone.

Apart from this unknown Realme smartphone, the smartphone maker has a bunch of new products lined for its consumer. The brand will soon launch its Realme X7 series in the Indian market as the device recently got the BIS certification. For those who’re unaware, Realme with its X-series focuses more on the premium flagship experience. Realme recently also launched its second smartwatch dubbed Realme Watch S. In the year 2020, the company focuses a lot on its wearable offering, and in fact, it ended up launching numerous TWS earbuds along with smartwatches. With that said, it would be interesting to see what else the smartphone maker has in stores for us. We still have around a month and a half for the next year and we might see some other solid products from the brand. Whenever that happens, you know we’re going to bring the information right on your screen.