A few days ago, Apple officially released the M1 chip for its new MacBooks. This marks the beginning of the gradual shift from Intel-driven MacBooks. According to TrendForce, Apple MacBook shipments are expected to reach 15.5 million units in 2020. This is an annual growth of 23.1%. The main reason for this growth is the higher demand for laptops due to the pandemic. Furthermore, the new Mac series, as well as the M1 processor, will boost the MacBook shipments to a record high next year. TrendForce believes that it will ship up to 17.1 million units in 2021. The annual growth will probably exceed 10%. 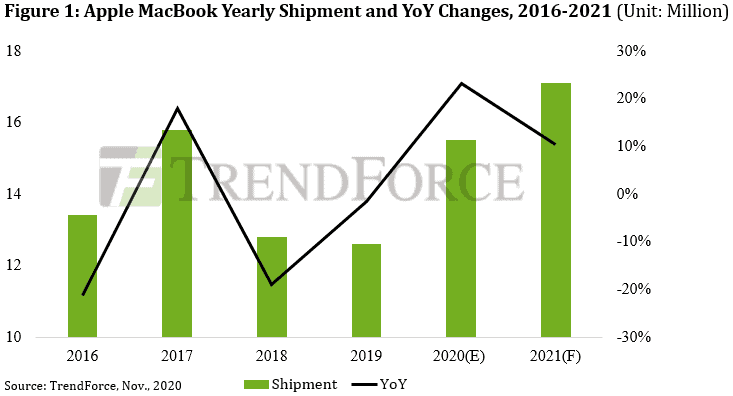 TrendForce said that although the new 13.3-inch MacBook Air has the same price as the old one, it is expected to significantly reduce power consumption by using Apple Silicon M1. This chip converts the original Intel X86 architecture processor to the ARM architecture processor. This will further extend the overall usage time of this notebook.

Furthermore, the various features of the Apple Silicon M1 and macOS Big Sur will continue to strengthen the interoperability between Apple’s products and improve the convenience and instruction cycle of use.

The M1 is on the new 13.3-inch MacBook Air and MacBook Pro. It is expected that the 14-inch and 16-inch MacBook Pro will also use Apple Silicon M series processors next year. The product performance will significantly improve. With the improvement, MacBook sales momentum will probably get stronger in the future.

According to TrendForce, based on the current estimate of 1.9% annual growth in global notebook market shipments in 2021, Apple’s performance is relatively good. Not only will it be able to drive Macbook shipments next year with its first self-developed computer processor, its market share in the global notebook market will also increase from 8% this year to 8.7% next year.