The temporary injunction prevents the US government from imposing restrictions on TikTok from November 12. The order issued by the U.S. Department of Commerce in August is supposed to be effective from Thursday. The order will prohibit companies from trading with TikTok. TikTok’s parent company, ByteDance, stated that this actually prohibits the use of TikTok in the United States.

In addition, ByteDance has filed a complaint with the court, seeking to prevent the US government from forcing it to sell TikTok. On Thursday, the U.S. Court of Appeals in Washington required ByteDance and the Trump administration to submit motions and other documents of the case before December 14 and 28, respectively.

According to a recent report, this app is currently testing a new feature on its platform. Although, the report did not give the name of the feature, it tells what the feature does. This feature allows users to directly raise funds for charities they care about through their personalized signatures. 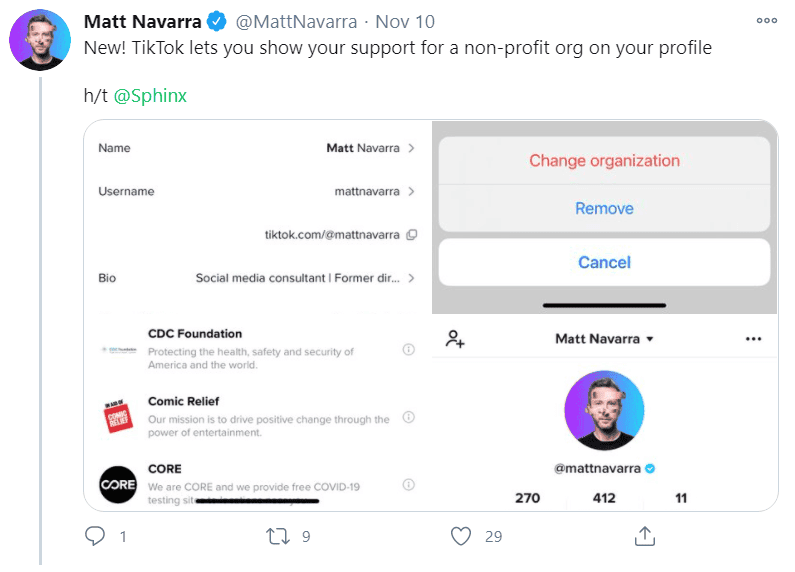 When test users click on “Edit Personal Signature”, they will find a new option instructing them to choose a non-profit organization and charity from many vetted organizations and charities. Once selected, the user’s personalized signature will show charity in red text below their profile. Then, when visitors click on the name of the organization, it will redirect them to a page that allows donations. This feature itself is supported by Tiltify, a charity fundraising platform dedicated to processing payment processing for donation transactions. Some charity organizations in the list include the American Cancer Society, American Heart Association, The Red Cross, the American Society for the Prevention of Cruelty to Animals, and the CDC Foundation.

This new option was discovered by social media consultant Matt Navarra. On Tuesday, he posted a screenshot of the feature on Twitter, which shows how users add charities and how visitors donate.

TikTok once launched another fundraising feature in April, allowing TikTok creators to raise funds for COVID-19 relief efforts. At that time, fundraising activities are possible only through “donation stickers”, which users could add to TikTok video and live streams. When you click on the “Donation Sticker”, it will take you to a page to donate, also supported by Tiltify.

The latest feature directly available for testers in the TikTok TestFlight program. This is not based on whether they are already using the “donation sticker” feature. However, the company did not disclose when this feature will be available to the public.

Next iPhone 13 will use soft batteries for the first time