Xiaomi is expected to release the Mi 11 series in January. As usual, we have a plethora of leaks and speculations regarding the upcoming series. The Xiaomi Mi 11 series will have at least two devices – Mi 11 and Mi 11 Pro. According to a recent report, the Xiaomi Mi 11 Pro will come with a 2K display. Subsequent leaks show that the display may actually be 2K+ because the horizontal pixel is 3200. There are also reports that this smartphone series will use a 120Hz refresh rate. Furthermore, information on the camera of the Mi 11 Pro is available. As of yesterday, a leak on the possible screen functions of the Xiaomi Mi 11 series hit the web. 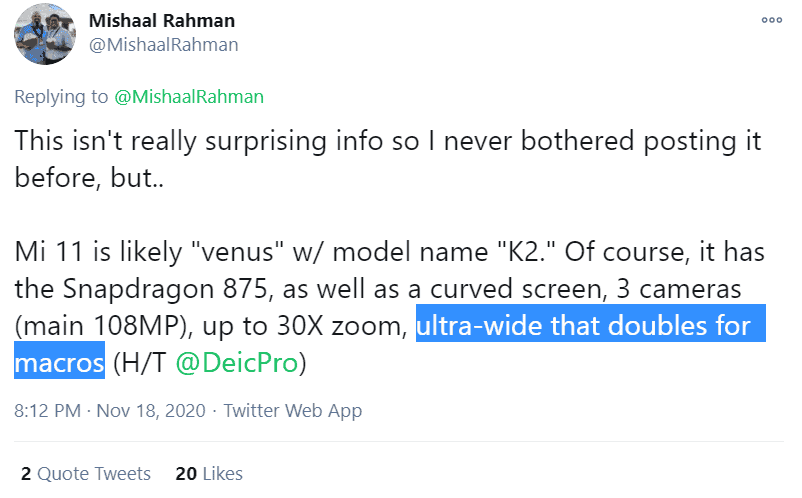 Most of this information does not specify the models in the series to have the feature. However, we now have specific information for the Xiaomi Mi 11. The information is coming from XDA Developers’ Editor-in-Chief, Mishaal Rahman. According to him, this smartphone will come with a Snapdragon 875 SoC, a 108MP triple camera, and a curved display. Also, the report shows that the rear camera will have a triple camera configuration. Furthermore, it will support 30x zoom as well as an ultra-wide shooter that also works for macro shots.

Qualcomm will host its annual Qualcomm Snapdragon Technology Summit early next month. During the event, the chip manufacturer is expected to release its next flagship SoC Snapdragon 875. As last year, some smartphone OEMs are expected to announce their next-generation flagship products at this event. Last year, Xiaomi was one of the few OEMs that announced its flagship during the technology summit. This year, there are expectations that the Mi 11 series will appear at the press conference. As of now, there is no official information regarding this upcoming flagship. However, the leaks so far suggest that the display will have a major upgrade.

Next Do You Know Which Is The Most Used Password In 2020?