Update: Huawei denies problems with installing Google applications on smartphones with Kirin processors. In addition, it seems that the described issue is an isolated case. Also, the original post has been deleted from Reddit, and many users have reported that they are able to install Google apps normally on their new and old Huawei smartphones.

Apparently, Google has taken decisive action and blocked the ability to install its applications on Huawei devices. For more than a year now, Huawei has been forced to release flagships and other new smartphones without Google apps and services installed due to US sanctions. However, users found workarounds and manually installed Google apps. Now there are more difficulties with manual installation.

One of the users of the social news resource Reddit drew attention to the problem. He said that for a year, he manually downloaded APK installation files for Google Maps and other applications and manually installed them. However, this trick recently failed for the first time.

When trying to install the latest version of Google Maps from the APK file on a smartphone, an installation error message appeared; and the reason was the following: “This application is not compatible with the CPU of your device”, although the previous version of the same application on the same smartphone did not have this problem.

The user tested the updated APKs of the latest versions of the Google apps on a much older Samsung smartphone and the installation went perfectly. He also took the trouble to try and install these same updated Google apps on other Huawei devices; including the Huawei P30, P20, P40, and so on. And in all cases, the installation on Huawei smartphones crashed due to the “incompatible CPU”.

Huawei and Google have not given official comments on this yet. 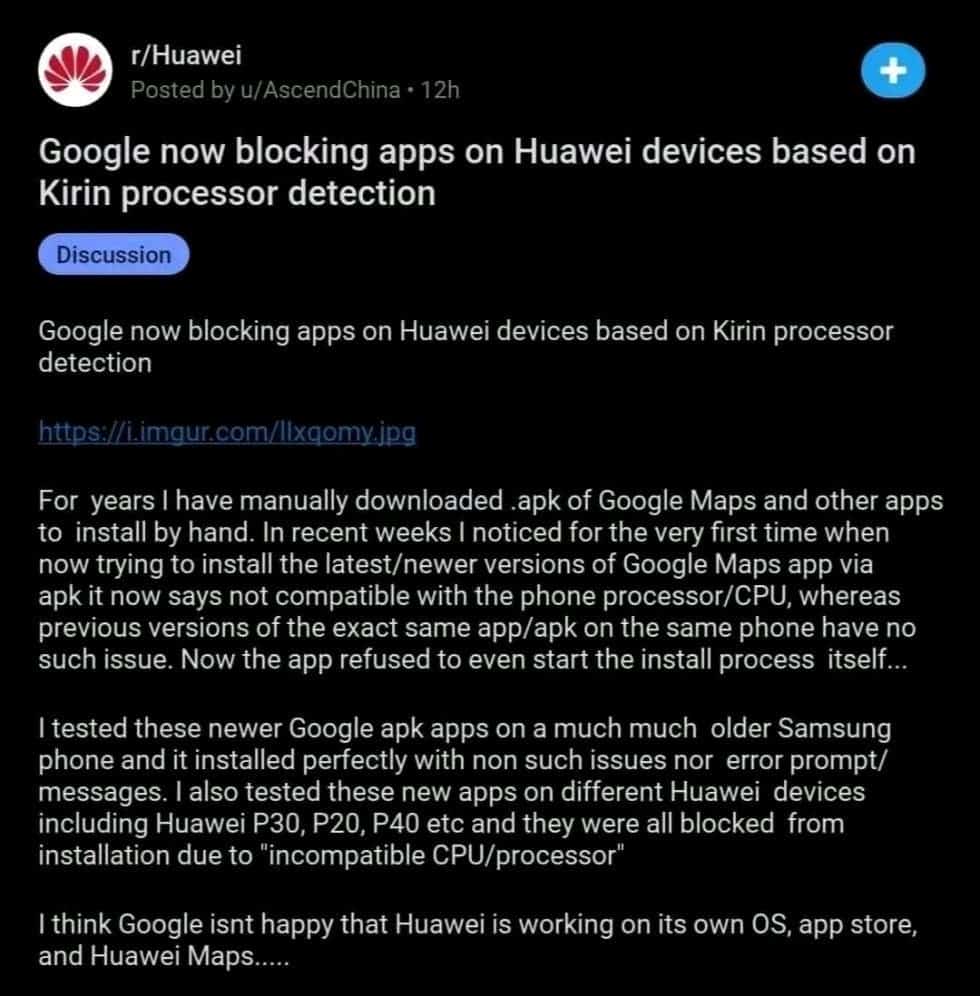 Recently, Huawei held a massive global conference where it released a plethora of products. In addition to the Huawei Mate 40 series, the company also released Huawei Sound, a 50W vertical charger, Huawei X Gentle Monster Eyewear II, Huawei Watch GT 2 Porsche Design, Huawei FreeBuds Studio, and so on. In addition to the Huawei mobile phones and gadgets; we also got more information on the Kirin 9000 SoC as well as a Kirin 9000E chip.

Yu Chengdong, Huawei consumer business CEO and executive director recalled the promise of the company four years ago. According to him, the company promised that Huawei mobile phones could be used for 18 months without freezing. However, this promise now extends to 36 months. In other words, Huawei smartphones with Kirin 9000 can 3 years without freezing.

Furthermore, test data shows that after 36 months in use, the fluency of Huawei Mate 40 Pro only drops by 2.5%. This is quite impressive considering that many three years old phones no longer get updates.

Update: Huawei denies problems with installing Google applications on smartphones with Kirin processors. In addition, it seems that the described issue is an isolated case. Also, the original post has been deleted from Reddit, and many users have reported that they are able to install Google apps normally on their new and old Huawei smartphones.

Next Here's Xiaomi, Redmi and Poco smartphones that will get MIUI 13