There seems to be a new trend with respect to Amazon and the recently released PlayStation 5. Earlier this week, there were reports that an Amazon delivery guy replaced the box content of the PlayStation 5 with items like pet foods and vacuum cleaners. Now, we are just spotting another report showing an Amazon delivery guy bolting with a PS5. Apparently, this happened last week and he was caught on CCTV camera. @dickidub who made the report released CCTV footage showing the driver “scanning and then returning the package back into the van”.

After reporting to the local Amazon warehouse, the company has now fired the employee. The sales giant initially planned to provide the customer with a £5 voucher. However, it later increased the sum to £50 and said it would investigate the incident. In addition, Amazon eventually returned the PS5. 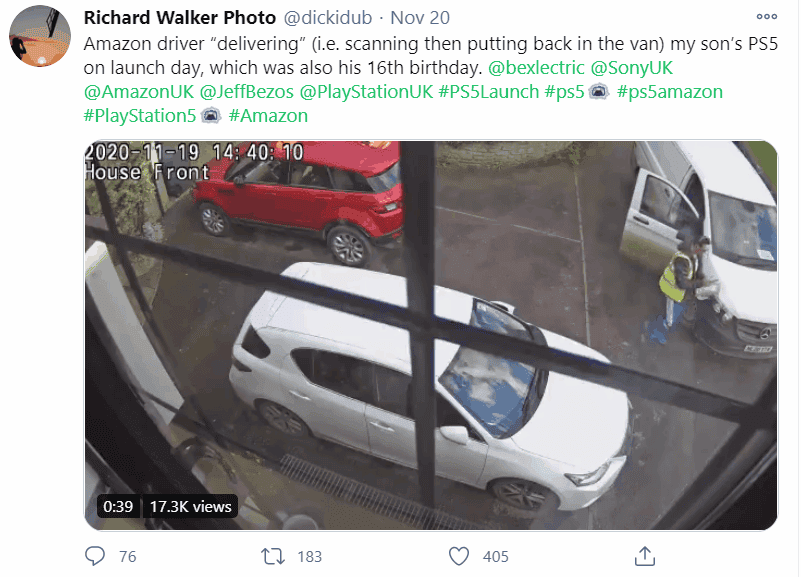 Amazon said in a public statement on “Oxford Mail” said: “We have very high standards for delivery service providers and how they provide services to customers. This delivery assistant will no longer represent us”.

It appears that such a situation is becoming more common with this company. This is not the first time that Amazon will have to deal with this type of situation. Recently, five Amazon employees in Spain were arrested with iPhones worth over $500,000 from a logistic center in Madrid. The company had to launch an internal investigation to reveal the culprits. It noticed a significant change in the weights of several iPhone boxes before it launched the operation.

Amazon cooperates with the U.S. government to check counterfeit products

Amazon announced on Tuesday that it will jointly conduct counterfeit inspections with US government regulatory organizations. This is the latest effort of the e-commerce platform to solve the problem of counterfeit products. Amazon said the company will cooperate with the National Intellectual Property Coordination Center under the US Immigration and Customs Enforcement Service to “analyze data and conduct targeted inspections to prevent counterfeit products from entering the US supply chain”. Any evidence from the inspection will be vital to the ongoing investigation. It will also help to track down criminals.

The operation, called “Operation Fulfillment Action”, is led by Amazon’s counterfeit crime department. The team consists of former federal prosecutors, investigators, and data analysts who mine information on the website and cooperate with federal prosecutors.