Although Huawei has a lot to deal with in the market, it is still expanding its business generally. Since the commencement of the U.S. ban(s), the company’s business has not been smooth. However, Huawei seems to be holding on to its own.  According to Huawei’s official Weibo handle, the company will open a new flagship store in Chengdu on December 6th. The theme of the opening event is “Smart Technology, Vigorous”. 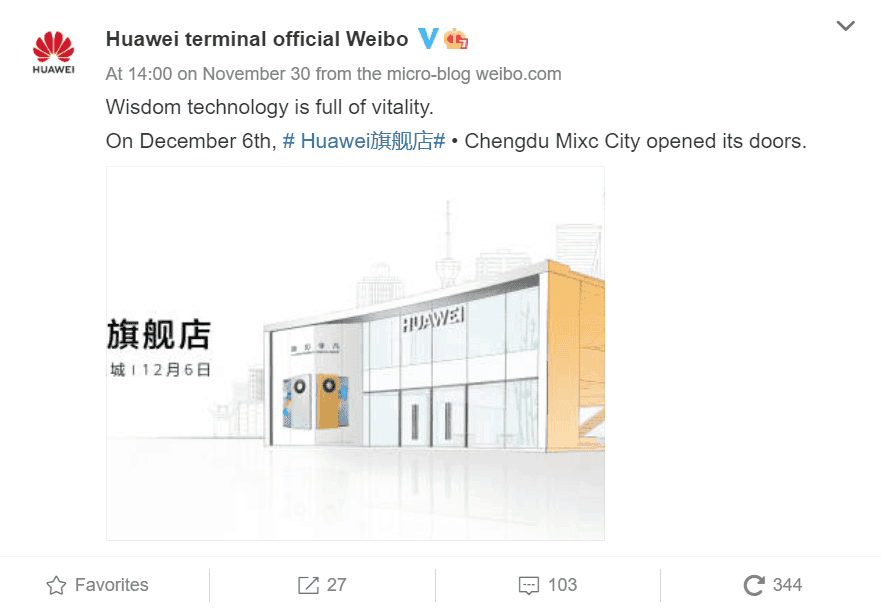 The Huawei flagship store in Chengdu Vientiane City will be the first Huawei flagship store in Southwest China. Huawei offline is still seeking continuous expansion and development. At the Huawei Mate 40 series conference in October this year, Yu Chengdong said that in 2010, the number of Huawei smartphone users was only 1 million. However, as of this year, the company’s full-scenario smart connection eco-system has up to a billion devices. Furthermore, the company has over 10,000 offline authorized stores. Prior to this, Huawei had opened global flagship stores in Shenzhen and Shanghai.

At Huawei’s Keynote speech at IFA 2020 in Germany, the company mentioned that it has plans to open more offline stores in Europe. According to the company, it will open 8 flagship stores and 42 experience stores across Europe. Furthermore, the speech reveals that the applications on Huawei’s HMS Core exceed 81,000, a year-on-year increase of 88%. Also, the number of developers in Huawei App Gallery is over 1.6 million, a year-on-year increase of 76%. These figures are for the first half of the year.

However, the company did not release a new generation of Kirin chips or other new products as usual. From previous years, it usually launches Kirin chips at IFA and releases its flagship mobile phone Mate series at the end of September. For example, at the IFA 2019 exhibition, it launched the Kirin 990 flagship series.

In addition, the Chinese manufacturer also launched a search service, Petal Search to replace Google search. Petal Search is designed by Huawei, but the search content comes from third-party partners. They include Qwant, the largest search engine in Europe, and Yandex, the number one search engine in Russia. Since its official launch in June this year, Petal Search has attracted 1 million European users. The number of applications accessing Huawei HMS Core globally exceeds 81,000 in H1 2020, an increase of 88% year-on-year.

Europe is an important market for Huawei