Starting yesterday, the Snapdragon 888 is on everyone’s lips. As you know, at the 2020 Qualcomm Snapdragon Technology Summit, Qualcomm officially released the new generation of mobile flagship platform.

As we can see from the screenshot, the model of the machine is vivo V2056A. It scores 1135 points in the single-core and 3681 points in the multi-core tests. 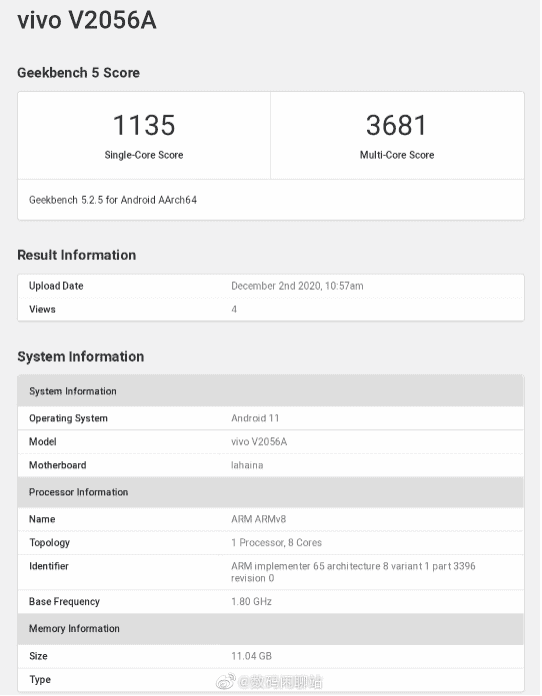 In addition, according to the news from a Weibo blogger, the new VIVO phone has the highest score among the currently exposed engineering machines. Also, it comes with OriginOS out of the box. The progress of the VIVO X60 Pro+ and the iQOO7 is relatively fast. They are going to hit the market as soon as next month.

At the Qualcomm 2020 Snapdragon Technology Summit, Hu Baishan, executive vice president and chief operating officer of VIVO, said through a video that VIVO and iQOO smartphone products will be the first to come with the new Snapdragon 888 5G mobile platform. They will bringing consumers more powerful performance and richer functional experience.

As Qualcomm’s most powerful mobile platform so far, the advent of the Snapdragon 888 also represents a new performance battle between major mainstream Android smartphone manufacturers in 2021. For consumers, there will be more choice.