Samsung Galaxy S21 smartphones should be officially announced only in January next year, however, almost all information on these devices is presented on the Web, and now sources have published all the wallpapers for the new line.

Wallpapers for smartphones are grabbed by developers after the phone’s firmware appears on the Web, usually after the official announcement, but Samsung Galaxy S21 wallpapers have already fallen into the hands of reviewers, who presumably signed a non-disclosure agreement in order to have time to prepare detailed reviews and conduct tests by the time announcement. 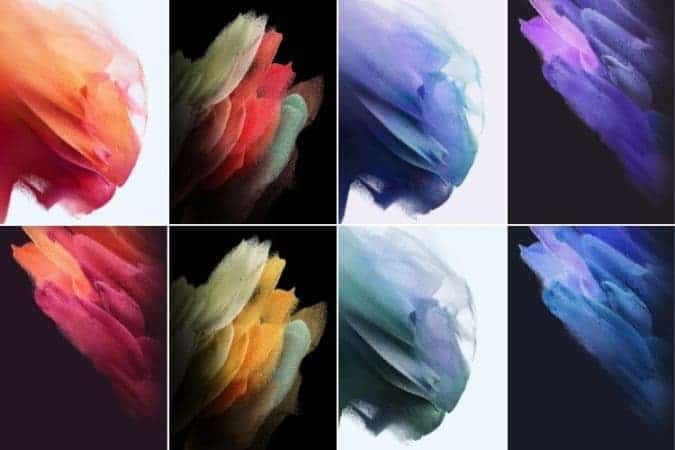 The official wallpapers of the Samsung Galaxy S21 series was shared by a well-known insider under the nickname Jimmy is Promo, who posted them on the Mediafire website and on his Telegram page. The collection includes more than two dozen wallpapers, including 12 standard wallpapers for smartphones, 4 pieces for DeX mode and 5 types of animated live wallpapers.

Galaxy S21 Ultra specs leak ahead of the launch

Samsung will announce its highly-anticipated Galaxy S21 smartphone series on January 14. After many leaks and rumors, we know pretty much everything we can expect about the new trio of flagships. The devices have leaked extensively in the past few days and passed through a high number of certification authorities. Now, a new leak has emerged revealing the entire specs of the Galaxy S21 Ultra. Just like the one that came previously, the Galaxy S21 Ultra will be the higher offering of the S21 series.

The specifications of the Galaxy S21 Ultra comes as a courtesy from Roland Quandt of Winfuture.de. The tipster is also responsible for the previously leaked press renders revealing the design of the three handsets. According to other leakster, the Samsung Galaxy S21 Ultra features a glass and metal sandwich design like other premium devices. However, the handset will come with a Corning Gorilla Glass Victus. It made its debut on the Galaxy Note20 Ultra and for now, remains something exclusive for Galaxy flagships.

The Galaxy Note 20 flaunts a 6.8-inch Infinity-O-Edge Dynamic AMOLED 2X display. It comes with a high WQHD+ resolution, which is 3,200 x 1,440 pixels resulting in 515 pixels-per-inch. The panel will be quite a brightness with a 1,600 nits peak brightness. Another interesting detail is that this panel has Adaptive Refresh Rate. Its panel can go from 1 to 120Hz refresh rate, something that will be exclusive to the S20 Ultra. Moreover, the panel will support S-Pen Stylus; but unlike the Note20 you can’t fit it inside of the handset and the stylus does not come in the package.

Furthermore, the handset will be powered by the Exynos 2100 chipset paired with 12GB of RAM and up to 512GB of Internal Storage. The Exynos 2100 is Samsung’s high-offering in the 5nm chipset department for the next year. The chipset sits above the Exynos 1080 that despite its 5nm architecture is still below 2100 in terms of performance. This chipset will be present in the largest part of smartphones, however, the US variant will come equipped with the Qualcomm Snapdragon 888 chipset.

In the camera department, the Galaxy S20 Ultra will have a primary 108MP wide-angle camera with f/1.8, 24mm, OIS and Auto-Focus. The device will have a secondary 12MP ultra-wide angle lens camera, with an f/2.2 aperture. There is a third telephoto sensor with a 10MP resolution offering 3x optical zoom and, finally, a fourth 10MP telephoto lens with 10x optical zoom. The camera setup is complete with PDAF, Laser AF, and LED flash. Hopefully, it will not be problematic as its predecessor. On the front, there is a 40MP camera with f/2.2 aperture, 25mm, and Auto-Focus.

On the connectivity front, the S21 will include dual-SIM + eSIM, 5G, Wi-Fi 6, Bluetooth 5.1, GNSS, NFC, and USB Type-C port. The device draws power from a 5,000mAh battery with 45W wired fast-charging support. Other features have fast wireless charging (Qi), Wireless PowerShare, Stereo Speakers, IP68 dust, and water resistance. The device comes with ANT+, Samsung Knox, DeX, and One UI 3.1 OS with Android 11 running on top. In counterpart to its predecessor that came in a single color; the Galaxy S20 Ultra will come in two colorways – Phantom Black and Phantom Silver.

Previous Samsung To Launch Cheap 5G Phones. But Can It Compete With Chinese Brands?