TSMC and Samsung are the two major chip manufacturers whose processes are doing well in the market. However, Samsung has been in the shadow of TSMC. Nevertheless, for Qualcomm’s latest flagship processor, Snapdragon 888 (SD888), it had to use Samsung’s 5nm process. The South Korean manufacturer will also release its flagship processor which is expected to compete with SD888. This chip is the Exynos 2100 processor which also uses Samsung’s 5nm process. According to reports, this chip will launch on January 12, 2021. 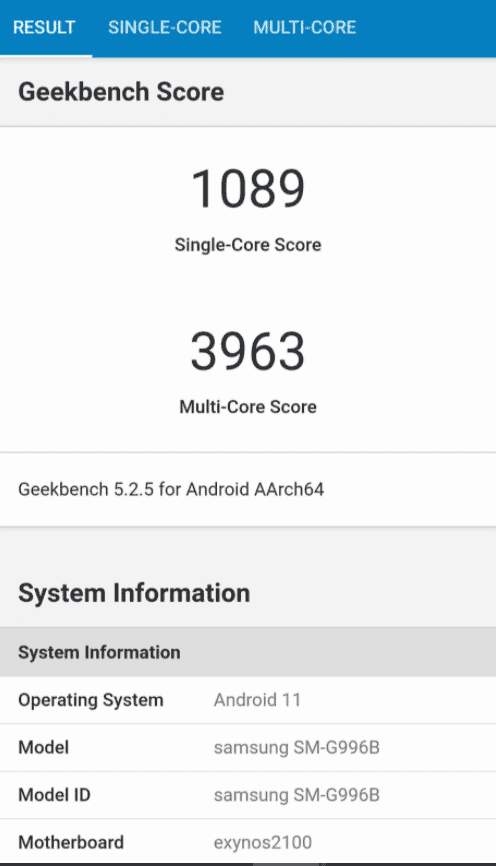 Unlike this year’s Exynos 990, Exynos 2100 seems to have a huge improvement. According to @UniverseIce, the latest Geekbench 5 running score of Exynos 2100 is an improvement over the previous score. It scores an impressive 1103 points in the single-core test and 3785 points in the multi-core test.  Of course, this is not the final result as the processor is not official yet. It is most likely that the final result will be higher than the current score.

So, how does the current Exynos 2100 score compare to Snapdragon 888? The Qualcomm Snapdragon 888 hits 1135 in the single-core test and 3794 in the multi-core test. This means that the scores of the two processors are very close, within the margin of error. It is interesting to see that Samsung chips are trying to close the gap with Qualcomm’s chip. However, it would have been more interesting if the SD888 used TSMC’s 5nm process. There would have been a basis for comparison between Samsung’s 5nm process and TSMC 5nm process.