OnePlus seems to have closed its year and is now focusing on the upcoming OnePlus 9 series. We’ve been seeing a plethora of leaks and rumors giving us some insight about the upcoming flagship series. Recently, it was discovered that we’ll see three models this year – the OnePlus 9, 9 Pro, and a third model dubbed OnePlus 9E / 9 Lite. For the first time, OnePlus will adopt a Q1 2020 launch window for the new smartphones. This seems to be accurate, as someone already got hold of an early prototype of the OnePlus 9. If getting a prototype wasn’t enough, the person tried to sell it on eBay at a steep price.

According to a report from AndroidCentral, the listing has since been pulled, however, the seller was asking a nice $3,000 (about £2,240 / AU$3,950) for the handset. The OnePlus 9 obviously will not break the flagship price barrier and cost like a luxury smartphone. The seller apparently was trying to appeal to enthusiasts that like to get a device that no one will ever have. 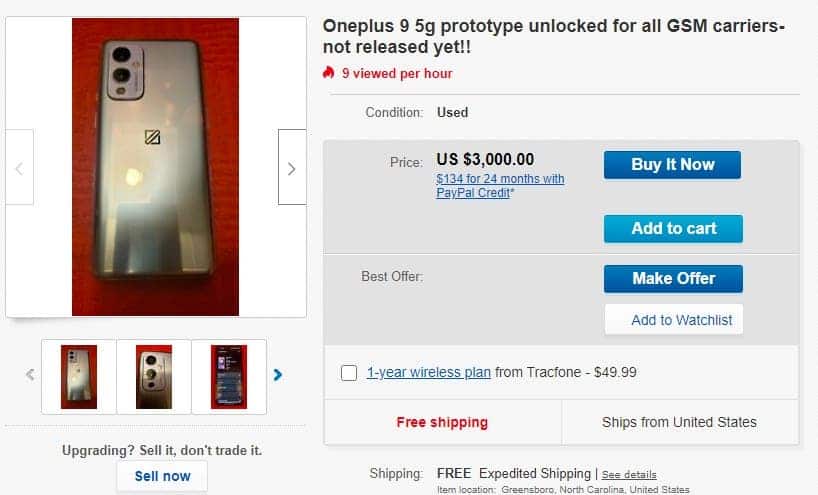 The prototype specs are on par with our expectation

According to the listing, this is the same prototype that appeared in leaked shots. It has a special logo on the back that OnePlus use for prototypes. Specs-wise, the device has a 6.6-inch diagonal, 8GB of RAM, 128GB of storage, and a 48MP main camera. The specifications are on par with the OnePlus 9 leak which certainly corroborates with the fact that is a true OnePlus 9 prototype that fell into wrong hands. The listing also confirms the Qualcomm Snapdragon 888 processor. It’s not a big surprise, after all, most of 2020 flagships are set to come with Qualcomm’s next-gen flagship. The first handset, however, will arrive tomorrow in the form of Mi 11.

OnePlus will be just another company entering the Qualcomm Snapdragon 888 series. The high-end chip will be present in the vanilla and Pro models of the flagship. The OnePlus 9E, or 9 Lite if you prefer, will come with this year’s Qualcomm Snapdragon 865 SoC. We’re not sure about the OnePlus plans with this model. It certainly will be cheaper than the 9 and 9 Pro. But it needs to be much cheaper to make users pick it over the Snapdragon 888 models.

According to reports, OnePlus will launch the trio of smartphones in March 2021. We’re one hundred percent sure that more leaks will appear in the coming weeks. Let’s keep an eye on eBay to see if other OnePlus 9 models will appear.

Previous I believe MIUI will be better - Xiaomi founder pledges