Not long ago, Oppo unveiled its Oppo Reno5 Pro 5G as its first mid-range contender to conquer the market in 2021. The company unveiled in China and a couple of weeks later started its global campaign. Now, Oppo is gearing up to unleash its new flagship series in the form of the Oppo Find X3 lineup. However, this can’t hold the company from providing updates to make the Oppo Reno5 Pro 5G better than it was at launch.

The new mid-range phone is getting its second software update today. The first firmware update arrived last month before the launch, and it improved the camera quality and system performance. Now the new firmware update bumps the Android security patch level on the Oppo Reno4 Pro 5G to January 2021. That’s the latest one available. Besides the new security patch, the update also comes to improve system stability and performance. It also brings enhancements for fingerprint unlocking and smoothness of the videos shot with the camera. 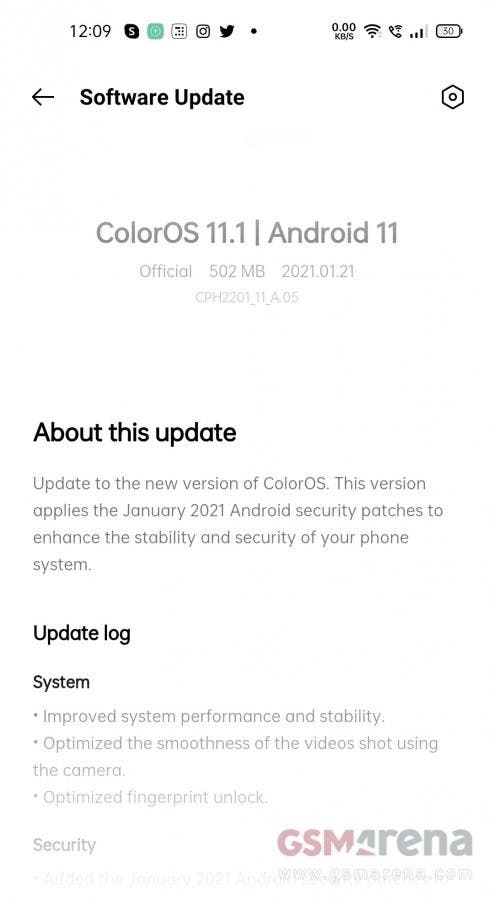 The new firmware update carries the version number CPH2201_11_A.05. It requires a download of a file weighing around 500MB. So far, the update seems to be reaching the Indian market. Not a big surprise, after all, it’s the only global country that has the Oppo Reno5 Pro 5G available for purchase right now. The situation can change in the coming months.

The handset comes with a 6.55-inch FHD+ display with a 90Hz refresh rate. This is a Super AMOLED screen that ensures the availability of an in-display fingerprint scanner. The panel has a top-left aligned 32MP selfie snapper. Moving around to the back we have a rectangular camera island serving as a house for the 64MP primary snapper, 8MP ultrawide, 2MP macro, and 2MP depth sensors. The phone draws power from a 4,350mAh battery with Oppo’s signature 65W fast-charging technology. The phone runs Android 11-based ColorOS 11 straight out of the box.