Oppo alongside other companies in the BBK Group is working hard to expand the availability of 5G smartphones in the market. The brand may be busy with the release of its Oppo Find X3 flagship series and Reno5 series expansion to global markets. However, this can’t prevent them from bringing competitive and affordable 5G handsets to the market. Today, the brand is bringing a new affordable 5G handset to China. The device carries an Oppo A55 5G moniker and boasts the MediaTek Dimensity 700 chipset with a 5,000mAh battery.

The device flaunts a 6.5-inch LCD IPS panel with an HD+ resolution and an unimpressive 60Hz refresh rate. Furthermore, the display has a waterdrop notch at the top that serves as a house for the 8MP f/2.0 selfie snapper. Under the hood, the phone carries the Dimensity 700 chipset. Although this is a “low-end” 5G chipset it still is very capable. It is made on TSMC’s 7nm process and has two Cortex-A76 cores clocked at up to 2.2GHz plus six power-efficient Cortex-A55 cores clocked at up to 2GHz. The Oppo A55 5G comes with 6GB of RAM and 128GB of Internal Storage. Unlike Oppo premium offerings, this handset comes with a microSD card slot allowing further memory expansion.

In the camera department, the phone packs a Triple-Camera array. It has a 13MP primary camera with an f/2.2 lens and two 2MP f/2.4 auxiliary shooters. The first is for macro shots, while the second will help to extract the depth of field in your pictures. Although it looks impressive, the chipset still has some limitations. One is the video recording cap at 1080@30fps, when it comes to slow-mo videos, the phone can record only with 720p resolution. 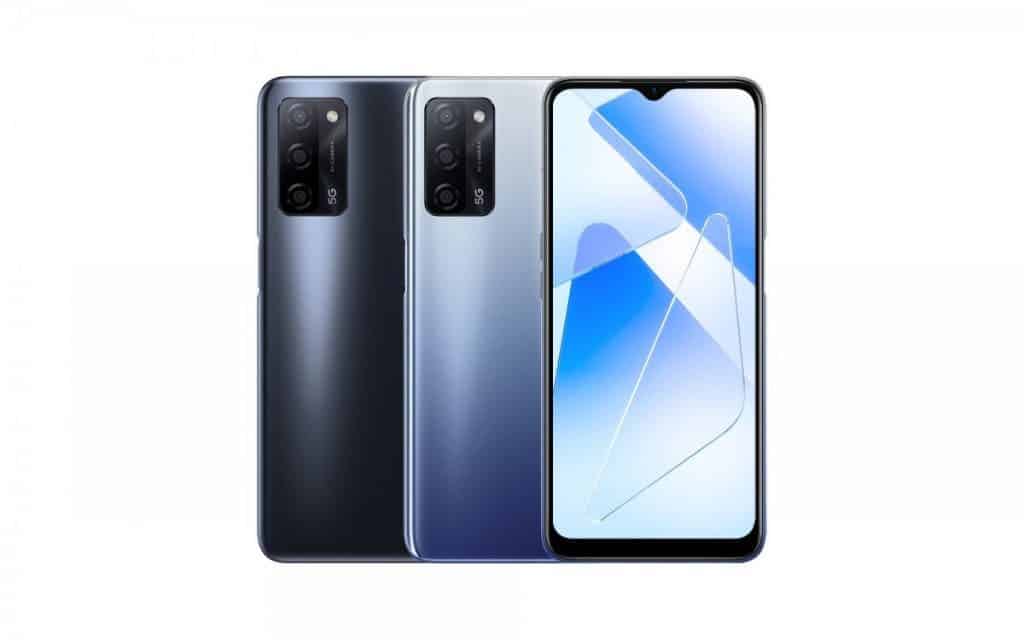 The Oppo A55 5G draws power from a massive 5,000mAh battery. The phone includes a USB-C port, but unfortunately, it does not support any kind of fast-charging technology. That means that you’ll take a long time to charge the battery with the standard 10W charging. This is sad, coming from a company that ships mid-range phones with 65W fast-charging. This is not a mere low-end phone, this is a 5G phone, so we were expecting at least an 18W charging rate. Next to the port, we have a 3.5mm headphone jack. Just like other mid-range phones in 2020/2021, the device has a side-mounted fingerprint scanner that doubles as a power button.

The handset is already up for sale at Oppo’s channels across China. It includes major online retailers such as Tmall and Suning. The device sells for CNY1,599, which is roughly $245. The device is available in Blue and Black colorways.