Over the past few days, there have been a lot of reports regarding the upcoming Meizu 18 series. A recent certification shows that Meizu’s upcoming phone will not come with a charger in the box. This has become a new trend in the smartphone industry after the iPhone 12 series launched without a charger in the box. The Xiaomi Mi 11 and Galaxy S21 series also comes without a charger. There were also reports regarding the charging capacity of two models in the Meizu 18 series. Today, @DigitalChatStation confirmed that these two phones are Meizu’s Snapdragon 888 iterative models. He further said these may be the Meizu 18 series which will arrive in Q1 2021. 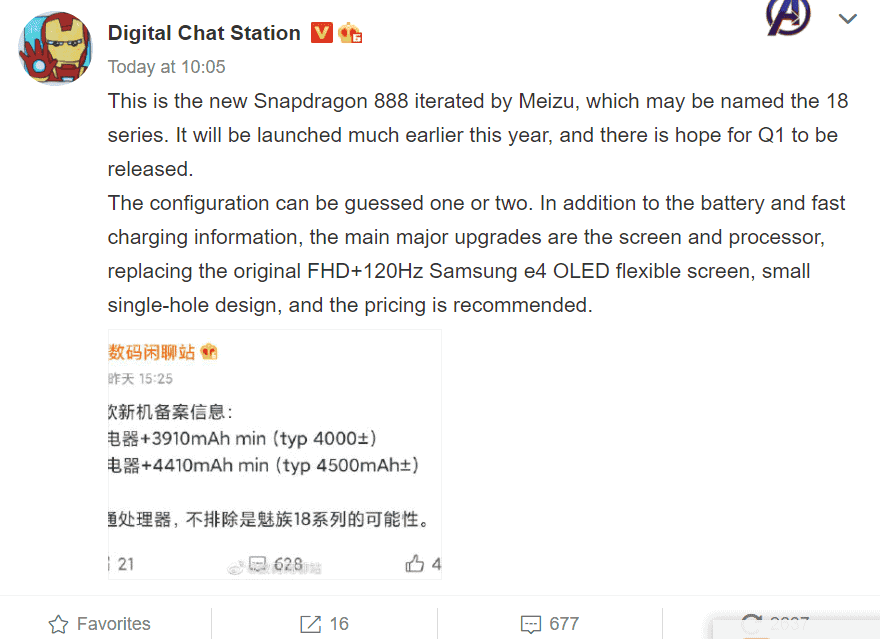 According to the information so far, the Meizu 18 series has a standard version and a Pro version. These models will come with 4000± and 4500± mAh batteries respectively. What is puzzling is that the standard version supports 30W charging while the Pro model supports 40W fast charging. Obviously, Meizu is some miles behind the competition. Presently, the charging power of mainstream Android flagships exceeds 50W. The likes of iQOO 7 even uses 120W fast charging. The charging power of the Meizu 18 series is only a little faster than that of Apple and Samsung.

In the past few years, mobile phone upgrades are mainly in three aspects: screen, processor, and camera. This year, the FHD+ 120Hz E4 screen will become the mainstream. In addition, the Snapdragon 888 is also the standard configuration of the Android flagship. The shortcoming of Meizu mobile phones may be in the camera department. Many manufacturers now use custom sensors and outsole flagship sensors. Only Meizu still uses the public version flagship sensor IMX686. As of now, we do not know if Meizu will upgrade the camera.

At the beginning of December, Meizu technology said that the first batch of Meizu Snapdragon 888 device will be available in the spring of 2021. Thus, if all goes according to plan, the Meizu 18 series should arrive in March.