Yesterday, we had a report from CINNO Research which shows that Huawei still comfortably leads the Chinese smartphone market. Now, the latest report from Canalys is showing a similar result. Canalys reports show the Chinese smartphone market performance for Q4 2020. In total, 84 million smartphones hit the Chinese market in Q4 2020.  This is a year-on-year decrease of 4%. For the full year of 2020, phone shipments fell 11% year-on-year to 330 million units. The rapid deterioration of Huawei’s performance due to the US sanctions affected its market recovery. 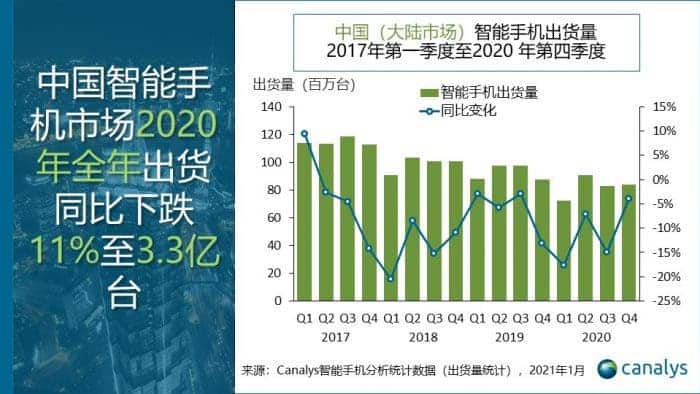 Nevertheless, the Chinese manufacturing giant still leads the smartphone market in China. In Q4 2020, Huawei shipped 18.8 million units. However, it also recorded a massive market share drop from 41% in Q3 2020 to 22%. Oppo quickly rose to second place, shipping 17.2 million smartphones, a year-on-year increase of 23%. Vivo also achieved a good year-on-year growth of 20%, ranking third with 15.7 million units.  Apple is fourth with a market share of 18% as well as a 15.3 million shipment. In the fifth position is Xiaomi with 12.2 million units, a year-on-year increase of 52%. 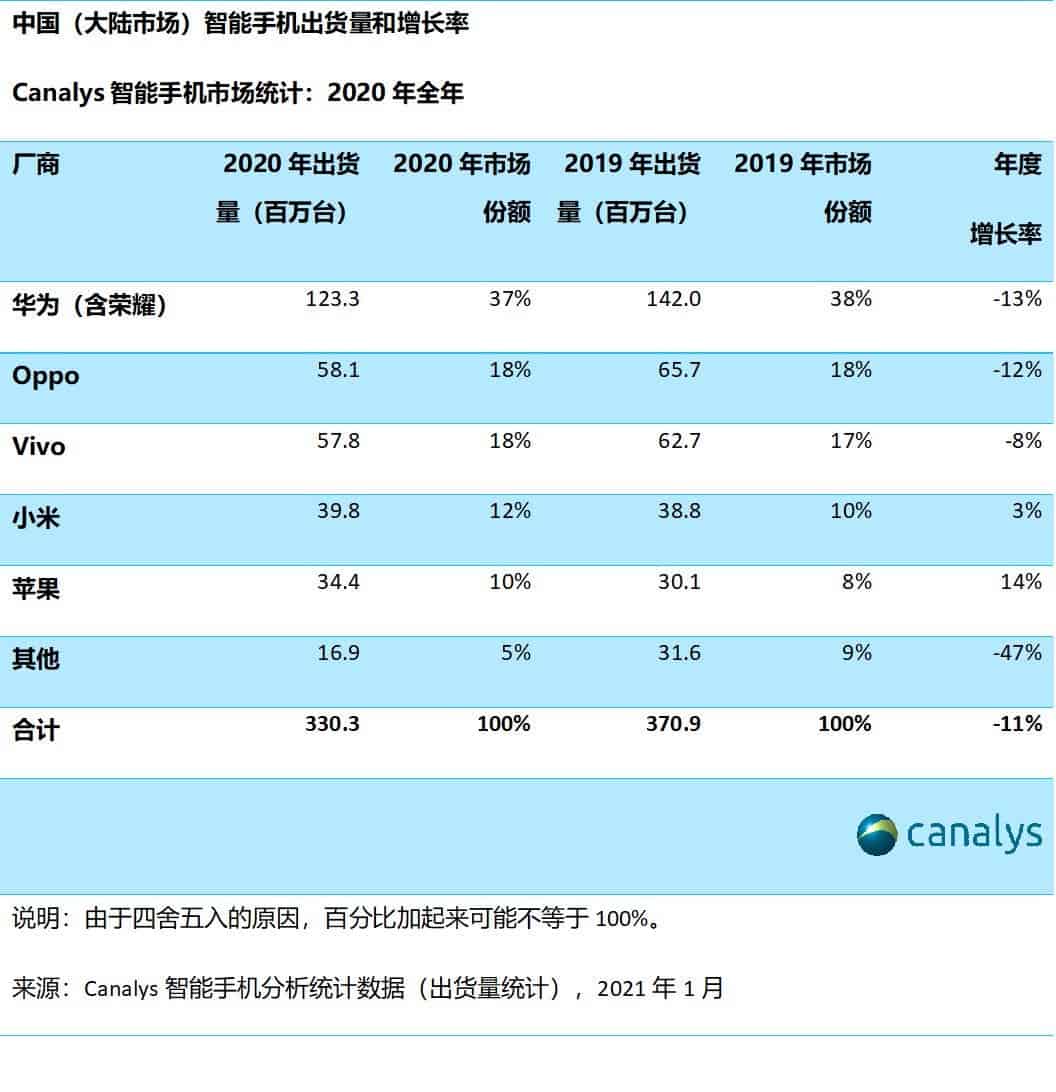 Huawei may not be able to hold its leading position

Huawei’s shipments in the fourth quarter shrank by nearly 50% year-on-year. Although the demand for Huawei’s products is still huge, Huawei will not be able to meet the demand in the foreseeable future. Other leading manufacturers are targeting this opportunity. Oppo, Vivo, and Xiaomi are seriously competing for Huawei’s offline channel in China. 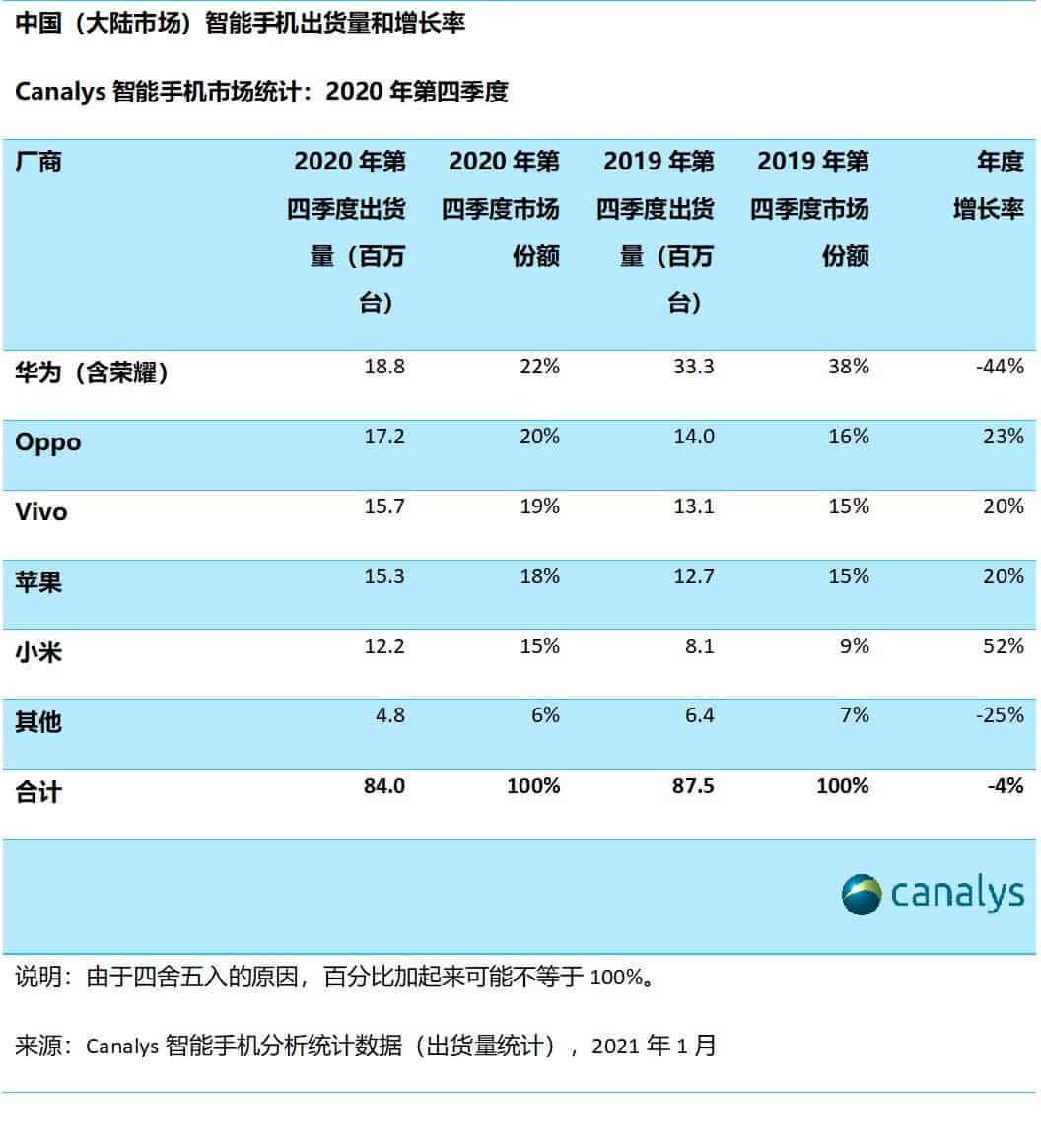 The timing of Apple’s launch of the new iPhone 12 in China coincided with the time when Huawei was discontinuing the supply. Huawei is Apple’s only strong competitor in the high-end segment, and its flagship Mate series shipped less than 4 million units in the fourth quarter. However, Apple has not relaxed the market promotion of iPhone12, including launching online promotion activities on major e-commerce platforms across the country.

According to Canalys, Honor is also a player that we should not ignore in China in 2021. Honor has almost fully inherited Huawei’s advantages and aims to win Huawei’s loyal customers,” said Nicole Peng. As 5G becomes a necessary feature of any smartphone on the market, head manufacturers such as Oppo, Vivo, and Xiaomi will double their investment in their flagship and high-end product lines. With Huawei’s market share retreat, consumers and channels will face other brands.