Last year, Huawei patented a silicon-carbon composite material and a method for producing it. They plan to use this material in new lithium-ion batteries to extend their life.

According to the description of the patent, we are talking about a durable composite material, which includes a core covered with an alkaline layer. The silicon core is filled with amorphous carbon, while the pore size does not exceed 50 nm.

The patent says that the tiny pore structure of the silicon-carbon composite material effectively reduces the contact area between the silicon material and the electrolyte, which reduces the likelihood of side reactions and prolongs battery life.

At the same time, the graphite skeleton can effectively reduce the volumetric expansion and contraction of the material to improve the structural stability and energy density of the composite material.

How much more efficient such batteries will be is still unknown. 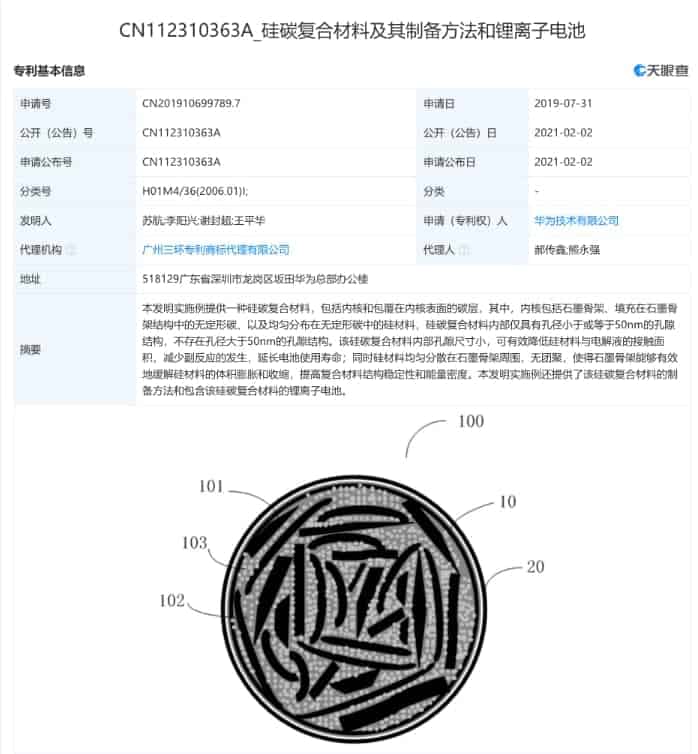 Huawei may not be able to hold its leading position

Huawei’s shipments in the fourth quarter shrank by nearly 50% year-on-year. The demand for Huawei’s products is still huge, Huawei may not be able to meet the demand in the future. Other leading manufacturers are targeting this opportunity. Oppo, Vivo, Xiaomi, and others are seriously competing for Huawei’s offline channel in China.

The timing of Apple’s launch of the new iPhone 12 in China coincided with the time when Huawei was discontinuing the supply. Huawei is Apple’s only strong competitor in the high-end segment, and its flagship Mate series shipped less than 4 million units in the fourth quarter. However, Apple has not relaxed the market promotion of iPhone12, including launching online promotion activities on major e-commerce platforms across the country.

Next Google is considering privacy protection similar to Apple's iOS 14.5