Back in November, Honor received a new blow of fresh air when Huawei decided to sell it to a Chinese conglomerate. Now, free of Huawei’s arms, the former sub-brand is also free from the all problems the big Chinese Behemoth is facing. Now as a separate company, the brand is free to make deals with other companies that have US-related technologies. In other words, it is free of the ban that has been plaguing Huawei since 2019. In the last month, Honor unveiled the Honor V40 (Honor View 40) as its very first smartphone as a separate brand. Now, the device was just certified at the Eurasian Economic Commission. It hints at an imminent launch in the European market, but the device is not coming alone. 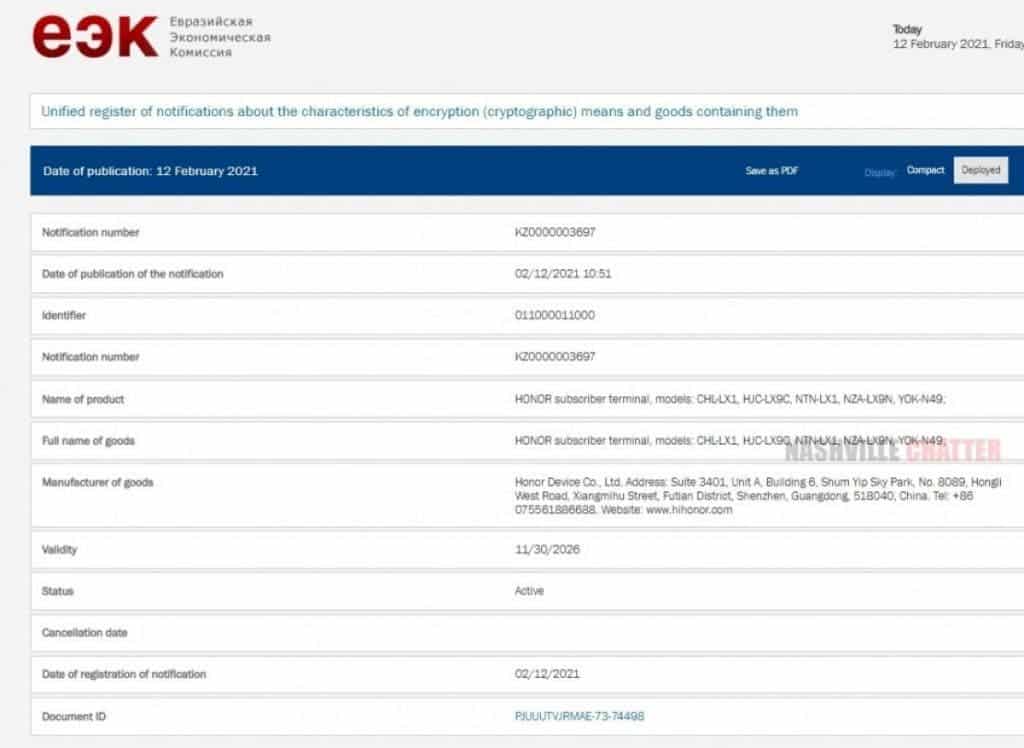 The HJC-LX9C and NZA-LX9 have passed by the EEC certification. Apparently, these devices are the global variants of two phones that have been certified on TENAA but have not yet officially been announced. According to the report, the first one is the Huawei Nova 8 SE but with a Dimensity 800U chipset. The latter does not have a name yet but brings a 6.6-inch HD+ screen and triple cameras on the back. It’s a little weird to see a Huawei phone getting certified as an Honor phone. Perhaps, the deal has taken more from Huawei than just Honor’s brand.

The other two devices are the CHL-LX1 and NTN-LX1. These devices are entirely new and will hit the shelves of Eurasian countries. The list of possible markets includes Russia, Belarus, Kazakhstan, and Armenia. For now, the specs remain a mystery, but we hope we will learn more about them in time.

We expect all those devices to come with Google Mobile Services, including the global Honor V40. After all, Honor CEO already revealed that the brand was in talks with Google and nothing can prevent them from using Google Apps anymore.

The Honor V40 5G comes in Titanium Silver, Midnight Black, and Rose gold colors. It’s available at 3599 yuan (US$ 556) for the 8GB RAM with 128GB storage version and the 8GB RAM with 256G storage version costs 3999 yuan (US$ 618).  It is already available for order in China. We expect the device to have a slightly higher price in these European markets. However, only time will tell.

Previous Here are the latest Android devices with TWRP build

Next Samsung pulls One UI 3.1 update for the Galaxy S20 FE