Yesterday Asus confirmed that the company’s new gaming smartphone will be called the Asus ROG Phone 5, and today it was announced that a presentation dedicated to the release of the device will take place on March 10 this year.

Asus has created an event page with a countdown to the launch date on its website. Previously, the device was found in the database of the popular Geekbench test application, so we know that the smartphone is based on the Snapdragon 888 SoC, it will be available in versions with 8 or 16 GB of RAM, and the operating system will be Android 11.

In addition, it appeared in the database of the Chinese regulator TENAA, which confirmed the Asus ROG Phone 5 is equipped with a 6.78-inch screen, its dimensions are 172.83 x 77.25 x 10.29 mm. The Asus ROG Phone 5 will receive a dual-cell 6000 mAh battery and will support 65-watt fast charging.

The camera sensor’s specifications have not yet been reported. 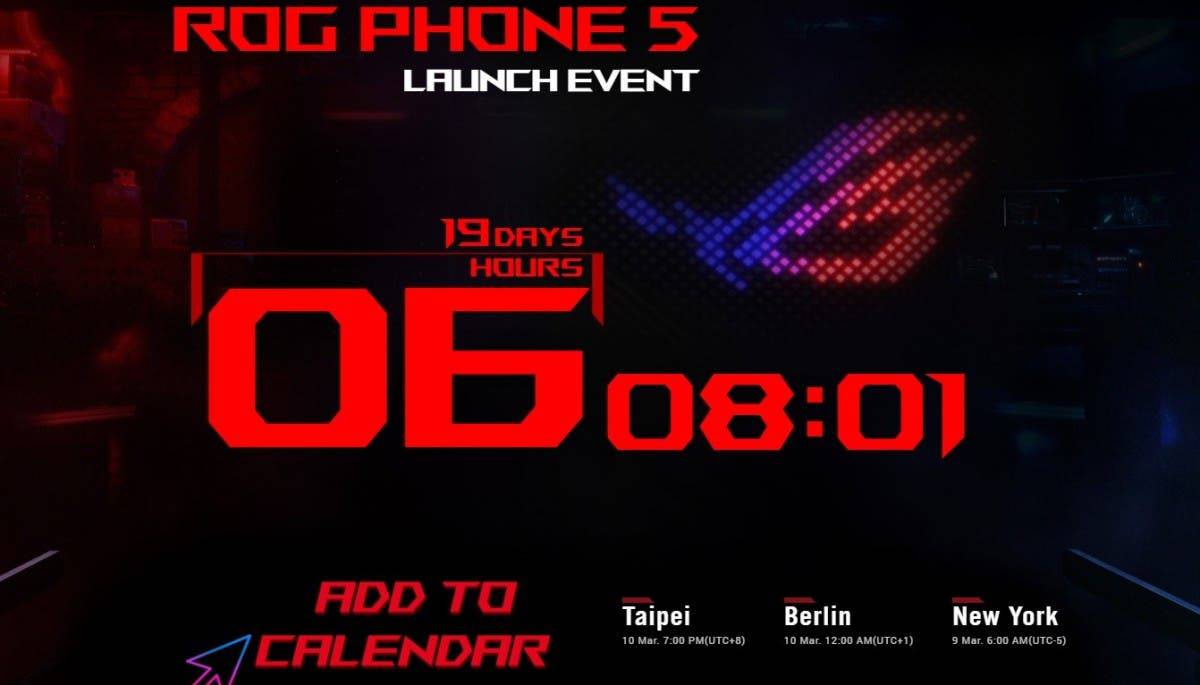 The first months of 2020 were marked by the arrival of multiple gaming smartphones from brands such as Black Shark, RedMagic, and iQOO. The ROG Phone from Asus came several months later which has proved it from competing with other players in the first quarters of 2020. Now, however, Asus is set to release its new ROG Phone 5 much earlier than usual. The company wants to make its device ready to compete with other phones like the Black Shark 4, RedMagic 6 which are expected for the next months. Apparently, we’re going to see more than a single variant of the ROG Phone 5.

Recently, the ROG Phone 5 has made yet another appearance at the TENAA listing. The new model sports Ioo5DB, if you recall, the previous model spotted in the Chinese authority was the I005DA. The B has a distinct back with what seems to be a rear-mounted display. The A Model has the LED-backlit Republic of Gamers logo and also comes with other decorative elements. In fact, the A model also brings a Tencent Games Logo. In case you’ve missed it, the Chinese conglomerate of games is partnering with the Taiwanese maker for a special ROG Phone 5. This version comes with focus and optimization for Tencent games. We expect this model to be Chinese-exclusive, so the new B model probably is the version that we’re going to see in Western markets.

The ROG Phone 5 with the I005DB model number has a little triangle under the camera; and what seems to be a small secondary display. Since the Tencent-games variant lacks this display, we assume that it will be a cheaper variant. We wouldn’t be surprised to see Asus bringing this variant to global markets as well, but without the Tencent logo. The company can sell it as a vanilla ROG Phone 5 and the dual-display version as ROG Phone 5 Pro. Despite the new display, both variants may have the same set of specifications.

The gaming phone will come with Qualcomm Snapdragon 888 SoC with up to 16GB of RAM. The device will draw its powers from a 6,000mAh battery. This is an excellent size for a phone that will be intensively used in games. The phone will also charge at a satisfactory 65W rate. Moreover, it packs a 6.78-inch AMOLED display with a 144Hz refresh rate.

We expect more details to come about the two variants in the coming weeks.