Earlier this year, Samsung launched its next-generation flagship Galaxy S smartphones dubbed Galaxy S21 trio. As per the trend, the company introduced a bunch of exclusive One UI features to the lineup. Of course, all these features were a part of One UI 3.1 software. Just like every year, some of these exclusive features traverse down to older generations of flagship devices.

A couple of days ago, Samsung announced the rollout of its One UI 3.1 software to multiple Galaxy devices. The list of supported devices includes the Galaxy S20 trio, Galaxy Note 20 duo, Galaxy Z Fold 2, Z Flip lineup, S10 series, and many more. All the supported devices have already started receiving the update but of course, the availability depends on region and carrier.

It hasn’t even been the week since the original announcement and Samsung has started seeding the update in the Indian market. Earlier today, we have received One UI 3.1 software update on one of the Indian S20 Plus and Note 20 Ultra.

Galaxy S20 series (S20, S20 Plus, and S20 Ultra) along with Note 20 series (Note 20, Note 20 Ultra) in India are now receiving the all-new One UI 3.1 software update. For the Note 20 Ultra, the update carries the firmware version N986BXXU1DUB6 and weighs around 1.4 GB in size. The Galaxy S20 Plus, on the other hand, brings the firmware version to G985FXXU6DUB5. The update weighs 1.2GB in size so you might want to use stable internet connectivity. 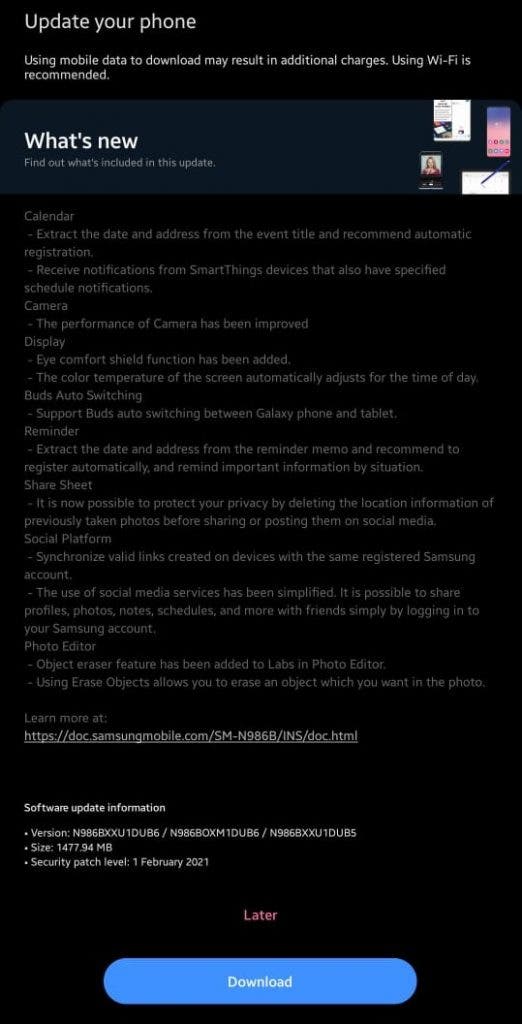 Apart from the latest One UI 31. software, the new firmware version also brings the latest February Android security patch. If you own any of the above-mentioned devices and reside in India, then you might have already received the update notification. If that’s not the case, then make sure to check for the update manually. Not sure how you can do that? head over to Settings>>Software Update>>Download and Install.

The latest update brings a bunch of exclusive One UI 3.1 software to the previous generation of Galaxy flagship devices. Single Take is already a popular feature when it comes to the Camera app on Galaxy devices. With the new update, users will be able to select the type of shots to capture from a small menu on the top-right corner. Samsung has also added an Object eraser tool that allows you to cut out unwanted parts of your photos.

Since we’re on the subject of cameras, the new update improves touch autofocus and autoexposure controller. The Pro mode now supports Multi Mic Recording allowing you to record audio from both your phone and the connected Bluetooth device. Other features include Eye Comfort Shield, Private Share, Auto Switch for Galaxy Buds, and many more.