Redmi is getting set to unveil the Redmi K40 series in China. However, this is not the only device that the company is currently working on. According to reports, the global version of the Redmi Note 10 Pro is “here”. Well, this is only a leak of the packaging box of this device. Thus, the smartphone is not official just yet, however, it is on its way. According to reports, this smartphone adopts a similar design to the Xiaomi Mi 11 and Redmi K40. This leak from Mi Update Philippines gives us more information on the design, camera, and more. 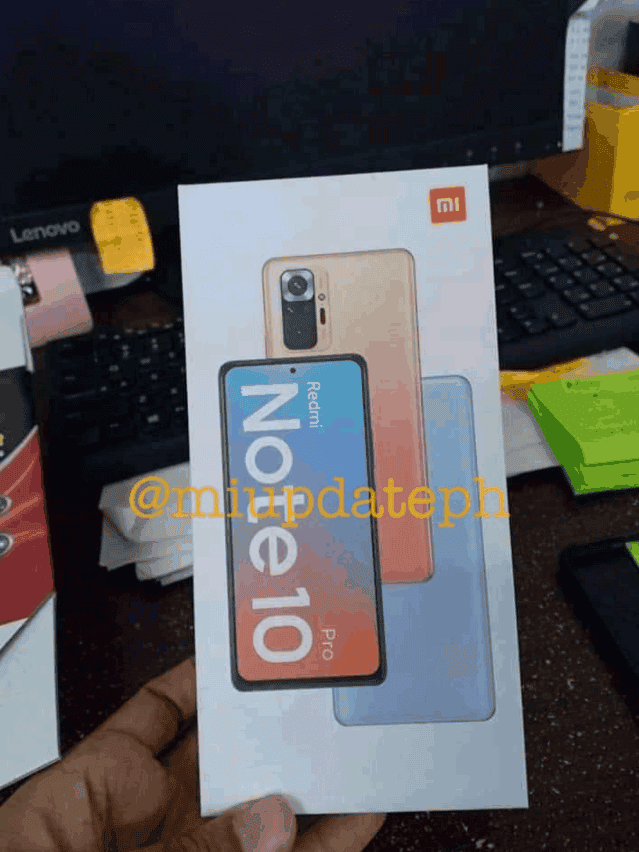 From the packaging box, we can see that this smartphone comes with a quad rear camera setup. The box also shows that the Redmi Note 10 Pro will also have at least three colour options. The colours includes black, orange and sky blue. The display comes with a punch-hole design for its single front camera. According to previous reports, this device will come with a Snapdragon 732G as well as a 64MP camera.

Furthermore, there are speculations that this device will come with a 120Hz IPS display. Also, it may use a 5050 mAh battery. These features may eventually be its main selling points. Since the Redmi Note series is positioned as powerful but affordable gaming phones, the battery capacity and screen refresh rate are quite attractive.

Well, this “gaming phone” comes with a Qualcomm mid-range chip. However, its important to note that the ‘G’ moniker in Qualcomm’s processors depicts gaming. This shows that the mid-range processor is optimized for gaming.

From the reports so far, we will have at least two models the the Redmi Note 10 series. In addition to the Redmi Note 10 Pro, there should also be a regular Redmi Note 10. Furthermore, one of these models will also have a 4G version. However, there is no information on the chipset that the 4G version will use.
In addition to the 64MP rear camera, the Redmi Note 10 series will also have an AMOLED dislay and a 108MP sensor on the top version. Furthermore, the top version will use a built-in 6000 mAh super-capacity battery that support 22W fast charging. As of now, reports on this series are still sketchy. However, we will get more information in the coming days. Keep a tab with us.
Source/VIA :
In Chinese