Back in the last month, Motorola unveiled a new “cost-effective” flagship dubbed Motorola Edge S. The handset stands as the first smartphone to come with the Qualcomm Snapdragon 870 chipset. For those unaware, this chipset was a nice surprise unveiled by Qualcomm last month. It is an improved version over the Snapdragon 865+ and can be considered a Snapdragon 865++. Instead of adopting the last year’s chipset, many companies will be able to use the Snapdragon 870 on cost-effective flagships. That is exactly the case of the Motorola Edge S which is cheaper than the usual flagship. The device was released in China, but we’re expecting a global launch to happen soon. Today, a new handset bearing similar specs has passed by Geekbench with the Moto G100 moniker. Apparently, it is the global counterpart of Edge S. 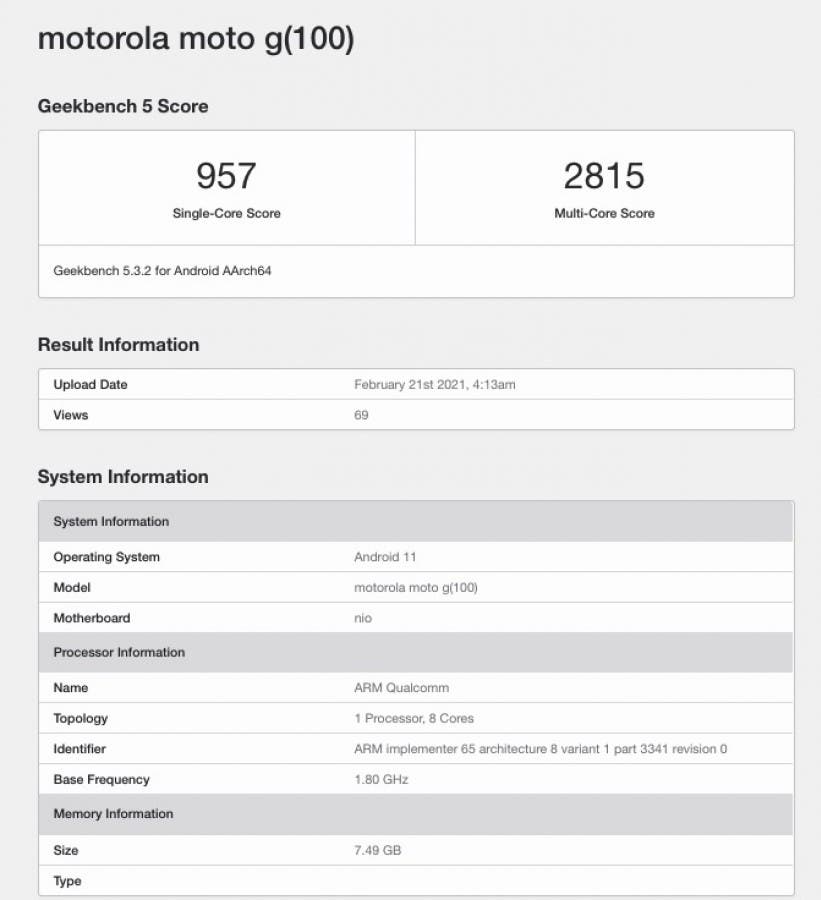 The Moto G100 passed by GeekBench with the “nio” motherboard. This corresponds to the last year’s Snapdragon 865 family. However, since the Snapdragon 870 is a Snapdragon 865-based chip, we will need to understand that Nio will mean Snapdragon 870 most of the time in 2021. According to the benchmark test, the phone amassed 957 points in the single-core tests and 2,815 in the multi-core tests. The phone also has 8GB of RAM and runs Android 11 OS.

Considering this package of specifications, it’s easy to understand that this device will be based on the Motorola Edge S. It will be the first flagship, or cost-effective flagship, coming under the Moto G-series. In fact, the Snapdragon 870 can blow away anything we have in the mid-range segment right now. So it will be the perfect way for Motorola fans to experiment with a good flagship-level performance. The only question that remains is whether Motorola is preparing a flagship with Snapdragon 888.

The Motorola Edge S was released earlier this month in China. It has a 6.7-inch IPS LCD with FHD+ resolution and a 90Hz refresh rate. The device has dual punch-holes that stand as a home for a 16MP selfie snapper and an 8MP ultrawide camera. Moving around to the back we have a Triple-camera array comprising a 64MP primary, 16MP ultrawide, and 2MP depth lens. Under the hood, the phone has the Snapdragon 870 and has 6GB and 8GB of RAM variants. Storage-wise, there are variants with 128GB and a higher one with 256GB. The device has Wi-Fi 6, Bluetooth 5.1, NFC, and GNSS.

The device draws power from a 5,000mAh that charges with 20W charging. It is available in Silver and Blue colorways. The device expected price for global markets is around $320. Hopefully, we will hear more about it in the coming weeks.

Next LG Electronics will stop developing smartphones with scrolling screens