Meizu was once one of the most notable smartphone makers in China. However, the company failed to keep up with the competition and lost space to other brands. This year, however, the company will try again with a bunch of new novelties. The brand is celebrating eighteen years since its establishment. For that reason, its festivities will bring a new UI, and new smartphones announced during a three-day holiday. A documentary will be unveiled on March 1, followed by the new Flyme 9 on March 2. The big event will be on March 3 when the brand will unveil two new Meizu 18 smartphones and, possibly, a smartwatch. 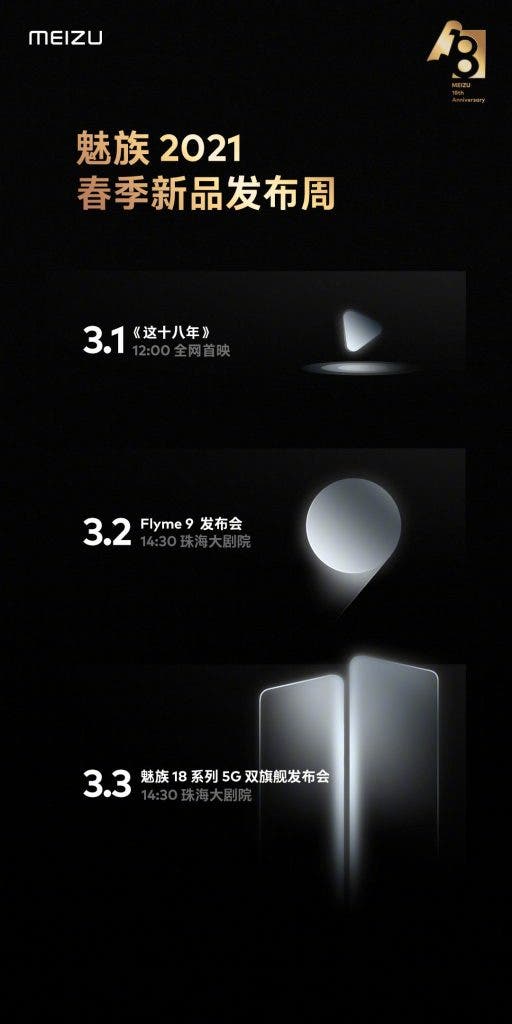 According to recent leaks, the new user interface will be based on Android 11, but the new devices will not come with Flyme straight out of the box. They will come with Flyme 8.3 instead, but it will still have Android 11 as underlying firmware. Under the hood, the Meizu 18 will carry Qualcomm’s cost-effective Snapdragon 870 flagship SoC. The Meizu 18 Pro, on the other hand, will come with the latest Snapdragon 888 SoC.

According to a listing from 3C, Meizu will draw power from a 4,000mAh battery complete with 30W charging. The Meizu 18 Pro, will have a bigger 4,500mAh with more capable 40W charging. Unfortunately, none of these devices will ship with the actual charge. For me, this is a missed opportunity. After all, Meizu isn’t the most appealing smartphone maker right now, it should offer the charging bricks to punch brands such as Samsung and Xiaomi. Instead, it decides to keep with a tendency.

Some rumors suggest a full-screen design for both Meizu 18 phones with a punch-hole in the middle. Interestingly, some leaks suggest an in-display camera, or a flipping camera mechanism. Unfortunately, we don’t have official-looking images to look at right now. There are rumors about a Meizu 18 Max smartphone with better specs, but we never saw consistent proof of this device’s existence. The devices are set to bring a Triple-camera setup with 64MP primary, 12MP, and 5MP sensors.

As mentioned above, the Chinese firm probably will unveil a Meizu Watch. So far, we’ve only seen a patented design and rumors about Flyme for Watch reveal. Meizu never launched a full smartwatch, so it would be the brand’s first try in this market. It launched a watch before, but it wasn’t a true smartwatch.

Previous So Is LG Electronics Selling Its Smartphone Business?