Despite the problems that the ongoing pandemic brought to smartphone makers, some of them managed to pass the year with bells and whistles. We can say that Realme is among the list of brands that had a very positive year. The brand expanded its flagship portfolio, debuted a bunch of 5G phones, and ended 2020 as the fastest-growing smartphone brand. Now it is gearing up to launch a new Snapdragon 888-powered flagship. The device leaked a lot under the Realme Race codename, and this month, the brand revealed it will go official as Realme GT 5G. The device will go official on March 4 and according to a fresh leak, it will be priced below the CNY2,999 ($465/€380) price tag. 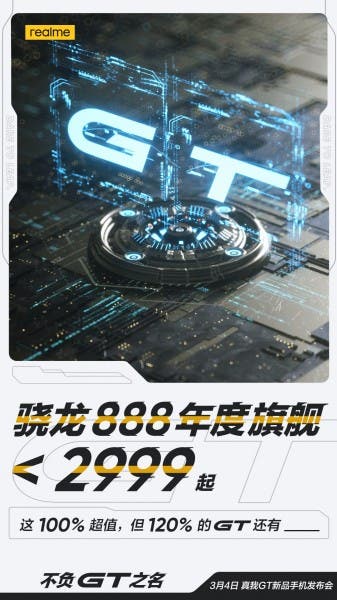 This alleged price will probably make the Realme GT 5G of the cheapest Snapdragon 888-powered smartphones in the market. In fact, it is priced below some premium mid-range phones such as the OnePlus Nord. It looks “too good to be true”, but the source is really credible. Besides the alleged price, the handset will pack a Samsung-made 120Hz AMOLED panel with a fingerprint reader underneath for biometric authentication.

Unfortunately, most of the Realme GT 5G specifications remain a mystery. However, we already have a set of leaked posters and teasers that brought some small details about the handset. We know that there is a variant with a glass back and another one with a Bumblebee-leather finish. The latter one probably will be dubbed Yellow Race. The handset will have a 64MP triple-camera system. Thanks to TENAA and 3C certification we know that the handset will pack a 4,880mAh battery with 65W fast-charging.

As mentioned above, the flagship will go official on March 4. We expect more details to surface in the coming days.

Next Redmi K30 has sold over 11 million worldwide