We can say that Oppo’s first 2021-relevant smartphones were released in December under the Oppo Reno5 series. These premium mid-range devices will slowly reach global markets in the next months, so they are quite important for the company this year. However, the brand still needs to bring its cutting-edge flagships under the Oppo Find series. This will happen in the next month with the release of the Oppo Find X3, Oppo Find X3, Lite, and Neo variants. We’ve been seeing leaks of these devices during the past few months. Hence, we know exactly what to expect from Oppo’s next big thing. Today, the Oppo Find X3 specifications have been further confirmed by Master Lu Benchmark today.

Today, the smartphone with model number PEDM00, believed to be the Oppo Find x3, passed by Master Lu Benchmark. Thanks to the listing, we have some specifications to confirm. First and foremost important, the handset will pack the Qualcomm Snapdragon 870 SoC. For those unaware, this chipset is an upgraded version of the Snapdragon 865+, offering more power and efficiency. It is cheaper than the Snapdragon 888 and will help some OEMs to reduce the prices of their non-Pro smartphones. 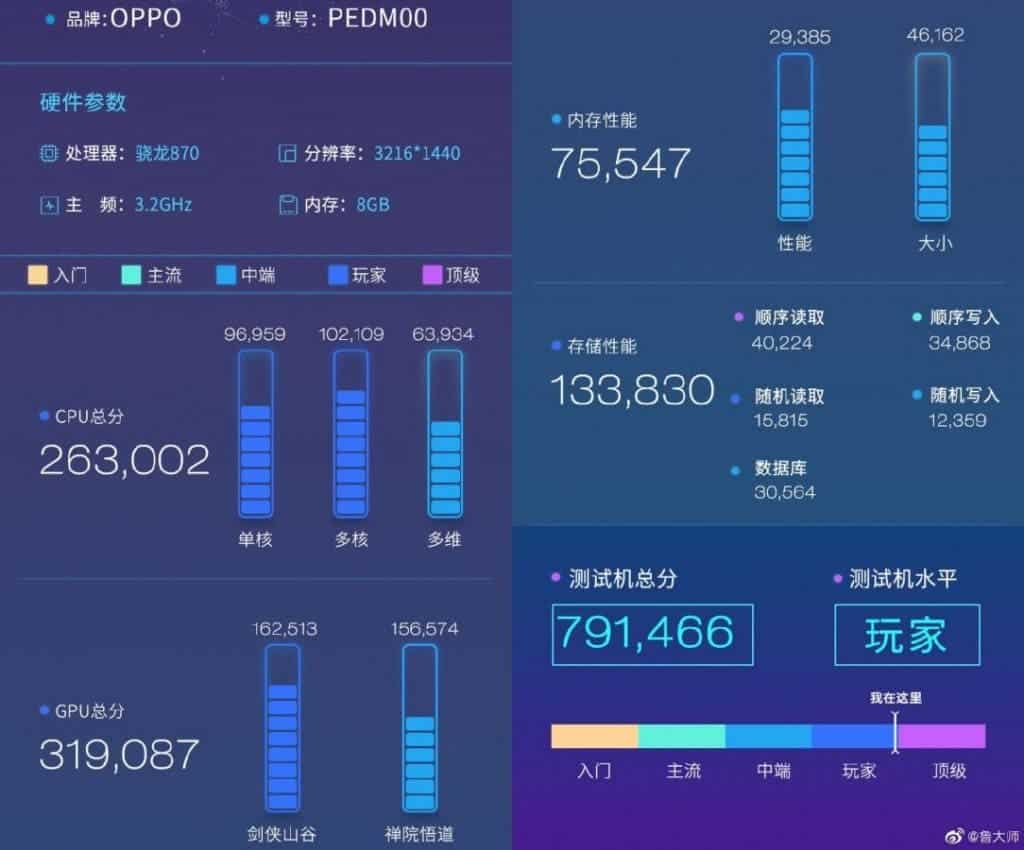 Besides the new chipset, the handset will come with 8GB of RAM and a QHD+ screen resolution with 3,216 x 1,440 pixels. This resolution is a surprise in the vanilla phone. After all, we’ve been expecting QHD+ only in the Pro variant. Apparently, both the vanilla and Pro models will pack this cutting-edge resolution. QHD panels were a thing some years ago, but they have disappeared with the advent of taller displays. In 2021, companies are finally bringing this resolution back.

The phone amassed a 791,466 score in the Master Lu Benchmark. You may not be familiar with this benchmarking tool. However, it is quite popular in China. This score clearly shows that the Snapdragon 870 isn’t here to play. It will offer stellar performance that will only be surpassed by its major sibling Snapdragon 888. Other specifications for the Oppo Find X3 include 65W fast-charging, ColorOS 11.2 based on Android 11, and two storage options – 128GB and 256GB. The Pro variant will come with slightly better specifications including the Snapdragon 888 and up to 12GB of RAM.

According to reports, Oppo will unveil its new smartphone series in March. But we’re still waiting for an official date.

Next Nubia Red Magic 6 series drops by at TENAA for a quick photoshoot!