Somehow, it is interesting to see that Huawei is still releasing smartphones. Almost everyone did not expect Huawei’s smartphone business to survive this long after the U.S. ban.  However, the company is still holding on to its own. In October last year, Huawei released the Mate 30E Pro with the Kirin 990E processor. This smartphone uses the “E” suffix for the first time. Now, there are reports that the Chinese manufacturer will release the Huawei Mate 40E in March or April. Obviously, this is not the “launch date” you expected to see but this is the first speculation regarding the arrival of this device. 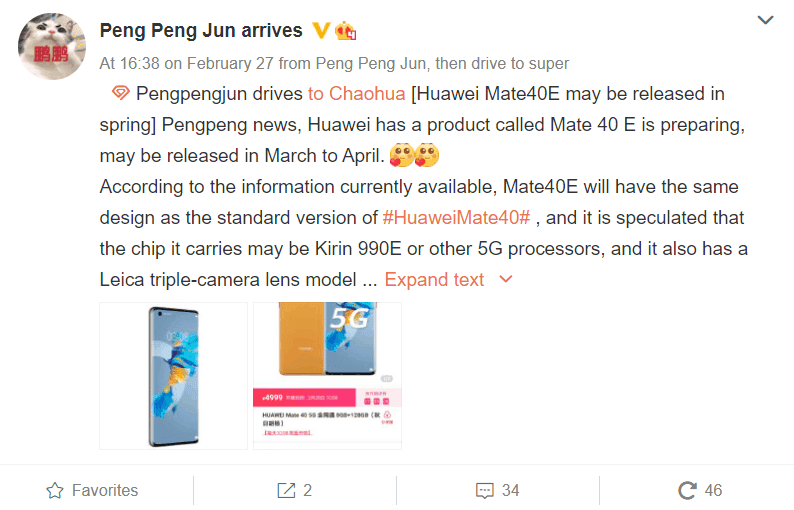 The report shows that this device will retain the design of the Huawei Mate 40 series. However, it will come with the Kirin 990E or other 5G processors. Furthermore, this smartphone will also use a Leica triple rear camera module. Other than this, there is no more information regarding the Huawei Mate 40E.

Back in January, a new Huawei device (OCE-AN00) got wireless charging certification. This smartphone uses a 6.5-inch OLED screen with a resolution of 2376 x 1080. The device will probably be Huawei Mate 40E.

Huawei hopes to re-open negotiations with the U.S.

Huawei hopes to hold talks with the Biden administration over the current trade ban. The company wants to negotiate separately from Beijing to lift the ban on the supply of American components.

According to NikkeiAsia, the reason for the negotiations will also be the detention of the chief financial officer of the Chinese tech giant Meng Wanzhou. Tim Danks, Vice President of risk management and partner relations at Huawei Technologies USA, said: “We want to have a discussion with the U.S. administration separately from the Chinese government. We don’t want to go into that discussion”. At this point, the company has yet to have a chance to speak with the new Biden administration but hopes to have discussions soon.

Last year, the Trump administration placed the Chinese brand on an export blacklist called the Entity List over security allegations. This made it impossible for Huawei to buy critical components from US firms. But the company is now hoping for a “tweak and temporary license” that will allow US companies to continue selling to the Chinese brand.

Tim Danks also added that “in the short term, US sales will not be a priority for Huawei. Our priority is the supply chain”. However, Biden’s candidate for Secretary of Commerce, Gina Raimondo, previously stated that she “will use the full toolbox at her disposal to protect America and our networks from Chinese interference or any behind-the-scenes influence on our network, be it Huawei, ZTE or any other company”. As of now, we can not tell the position of the new administration. However, we expect some sort of political solution to be available for Huawei.