Previously, we saw only saw the front of Note 10’s box. The new leak comes from Sistech Banna. This time the leak covers a different side and it also shows us the retail price of the Redmi Note 10. According to the retail box, the price of the Redmi Note 10 is INR. 15,999 that roughly translates to 217 USD. This is for the 6GB+64GB variant. Since the price is usually cheaper than mentioned on the retail box, we can expect anywhere from between Rs.14,000 to Rs.15,000 (~$190 – $203). It is actually a good price considering it comes with an AMOLED display. 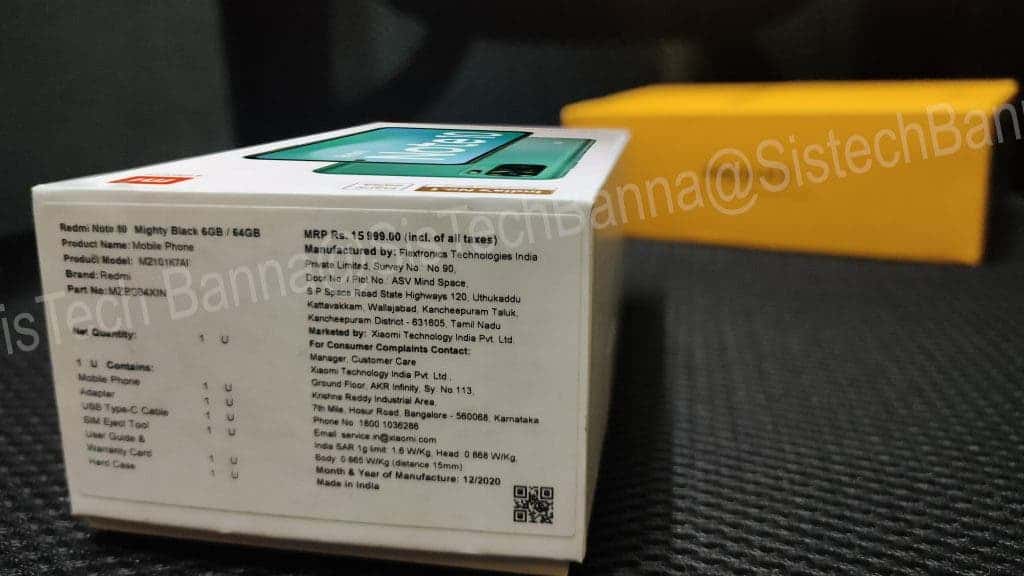 Other than that, the new leaks show that we will be having a black version of the Redmi Note 10 which was expected. It will be named Mighty Black. The box also mentions the items that will get in the box of Redmi Note 10. We will be getting the mobile phone, adapter, USB-Type C cable, SIM eject tool, User Guide, Warranty Card as well as a hard case in the box.

To recall, the Redmi Note 10 series are all set to launch in India on 4th March. Many of the key specifications of the Redmi Note 10 have been leaked. The Redmi Note 10 will be featuring an AMOLED display. Redmi has been using the IPS LCD panel for quite a long time. However, things are about to change this year. Recently, we have seen Redmi focusing on display a lot. The Redmi K40 series also focuses on display. It comes with an E4 AMOLED display. It is a good thing that the Chinese company is focusing on other things apart from performance.

The leaked hands-on video of Redmi Note 10 showed the device from all the corners. We saw a dual speaker setup, a new camera design. The device however uses the side-mounted fingerprint scanner instead of in-display even though it comes with an AMOLED panel. It was also done with Redmi K40 to cut the costs. Let us know your opinions on the Redmi Note 10 pricing in India in the comments section below.

Next Mi Talk: Xiaomi launches its Clubhouse for Android and iPhone