In February of this year, IPLytics, a world-renowned patent data company, released a report on “Who Is Leading the 5G Patent Race?”. The report captures major organizations that report to ETSI (European Telecommunications Standards Institute) on their number of 5G standard-essential patents (SEPs). Presently, there are much more companies with 5G standard-essential patents (SEPs) than last year. Thus, it is important to keep track of the patent leaders in connectivity. 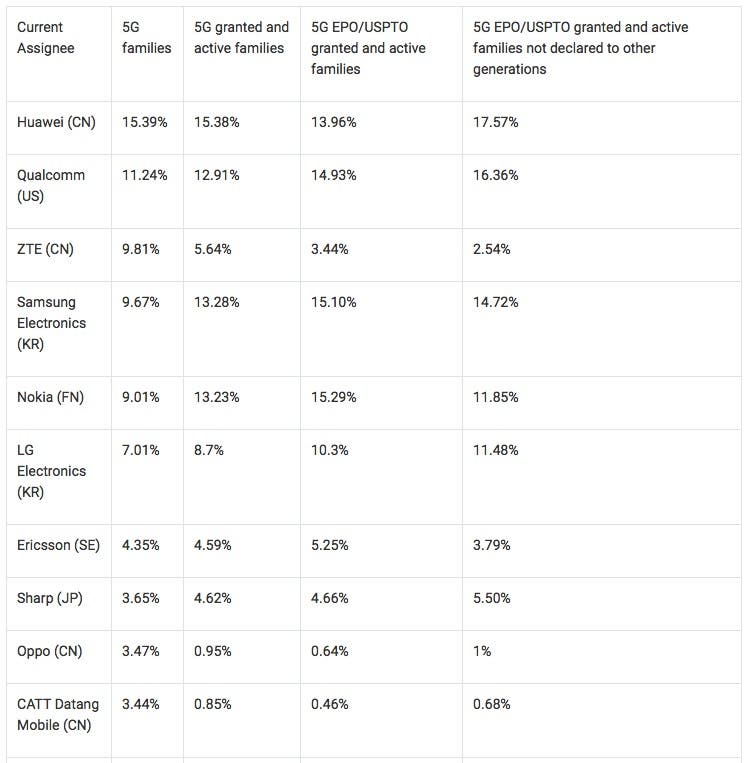 The report covers 22 companies. Among them, Huawei ranks first with 15.39% of applications while Qualcomm is second with 11.24%. Another Chinese manufacturer, ZTE is third with 9.81%. Samsung and Nokia come fourth and fifth respectively with 9.67 and 9.01%. However, this ranking is for the 5G standard-essential patents (SEPs) application.

While Huawei also launched the most application overall, U.S. company Qualcomm comes second when counting granted and open applications. Well, whether we are talking about the 5G essential patent application or patent granted, Huawei is still on top.

We look at the patent application because the patenting process can take several years. Thus, after granting the patents, the percentages can change significantly.

For granted 5G essential patents, Huawei is tops with 15.4% while Samsung is second with 13.3%. Qualcomm follows closely in the third position with 13.2% while LG is fourth with 8.7%. ZTE is fifth with 5.6% of the total patents.

American companies are catching up

As of May 2019, Huawei’s 5G essential patent surpasses that of all American companies put together. At the time, Lu Yong, vice president of Huawei Technologies Co., Ltd. said that Huawei has over 16,000 5G standard patents ranking first in the world and accounting for 20%. All companies in the United States account for less than 15% of 5G core patents. “China believes that we have the largest 4G network in the world, and we have every reason to believe that China will also have the world’s largest 5G network.” Lu Yong believes that with such a large market space and cyberspace, 5G can make China realize the digitalization of thousands of industries, and truly realize the transformation of 5G digitalization.

Lu Yong also said, “Huawei should be said to be another wave of turmoil today, but from my personal understanding, in fact, Huawei’s internal 180,000 employees seem to be like the hurricane in the hurricane. We are very calm. We are a kind of bean sprouts…”

However, the statisctiscs are currently changing. Though, Huawei still leads, it is not as massive as it was a couple of years ago.