Motorola started its 2021 journey in the mid-range segment with the Motorola Moto G10 and G30. The new devices debuted last month in global markets featuring large displays, big batteries, and a Quad-Camera setup. Now, the company has officially announced that the Moto G30 is making its way to the Indian market. Alongside it, the brand will unveil a new smartphone dubbed Moto G10 Power.

According to the Motorola press release, the Moto G10 Power and Moto G30 will arrive in India at 12PM local time. The duo of handsets will be sold exclusively through the Flipkart channel. The company also teased Android 11 straight out of the box, which is anything but surprising at this point. They will also come with a feature dubbed ThinkShield. The Moto G30 isn’t a big surprise, for that reason, we know most of the handset’s specifications. 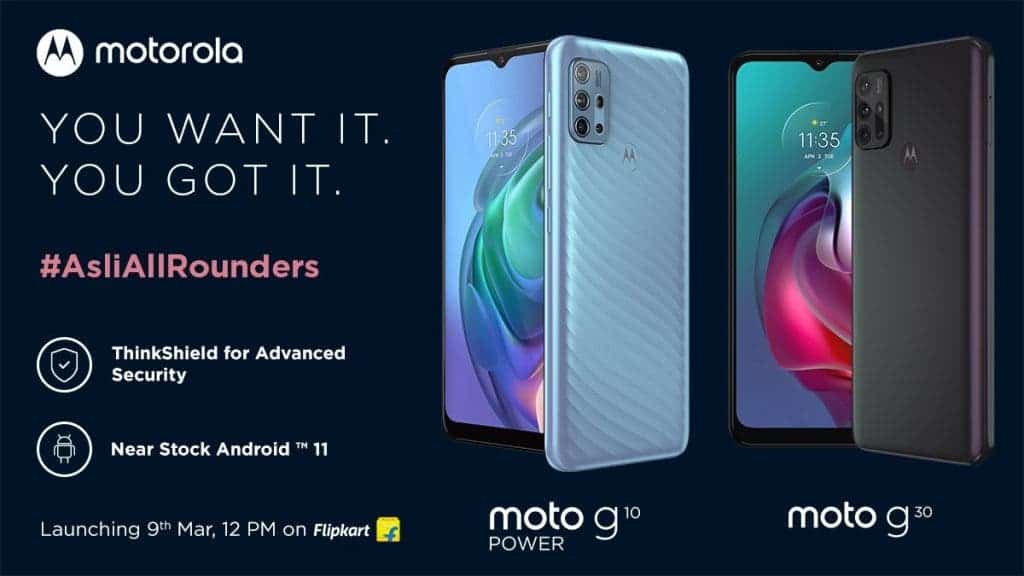 The Moto G30 was introduced last month featuring a Qualcomm Snapdragon 662 chipset. For those unaware, this chipset came to the market to succeed the Snapdragon 665. Despite having a lower number, OEMs state that it offers better performance than the SD665. The handset comes in two memory configurations. One has 4GB of RAM and 128GB of Internal Storage and there is another one with 6GB of RAM and 128GB of Internal Storage. The phone also offers support for microSD cards. For now, it’s unclear what configuration will come to India.

The handset has a 6.5-inch LCD with HD+ resolution and a 90Hz refresh rate. This is a waterdrop notch display, the cutout serves as a home for the 13MP selfie snapper. Moving around to the back, we have a Quad-Camera array consisting of a 64MP primary, 8MP ultrawide, 2MP macro, and 2MP depth units. The rear also serves as a home for the fingerprint render which has the usual Motorola logo engraved inside.

The handset brings vanilla Android 11 OS and the lights are kept on by a 5,000mAh battery. Thankfully, the device comes with 20W fast-charging capabilities.