DxOMark has tested the audio recording and playback capabilities of the compact iPhone 12 mini, which went on sale last fall.

The 5.4-inch iPhone 12 mini has similar sound features to the iPhone 12. The smartphones have two speakers and two microphones for noise cancellation, and support for Dolby Atmos technology.

As a result, the smartphone received 73 points, including the same marks for the quality of sound recording and playback. The iPhone 12 received exactly the same amount. This allowed the iPhone 12 mini to get to eighth place in the corresponding ranking of the best DxOMark audio smartphones, which is topped by Asus ROG Phone 5 (79), Xiaomi Mi 10 Pro (76) and Huawei Mate 20 X (75).

Apple has managed to squeeze high performance into a small package with the iPhone 12 mini. Following in the steps of the iPhone 12, it has advanced on previous iPhones as both a playback and recording device, and because it’s significantly smaller than the iPhone 12, that accomplishment is even more impressive. As a playback device, the iPhone 12 mini produces good timbre, and its spatial performance is solid, making its audio a valuable aspect of the video-watching experience. As for drawbacks, there’s the fact that the audio scene doesn’t rotate with the position of the phone. A lack of low-end extension and reduced loudness impairs punch, and the lack of bass and low-mids impairs tonal balance.

The disadvantages include not very high volume and lack of low frequencies. 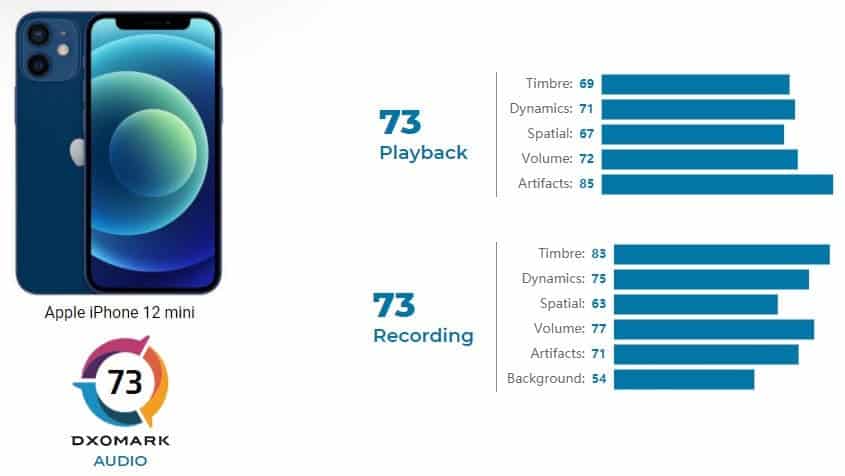 Previous Shooting video in Google Camera 8.2 can be started very easily and quickly