Samsung is preparing to release a new generation of branded smartwatches. In the meantime, their information begins to accumulate in the network.

If you believe the tech insider Ice Universe, whose track record is quite deserving of respect, the Galaxy Watch 4 and Galaxy Watch Active 4 models will be announced very soon.

Apparently, the company will not wait for the traditional presentation of flagship smartphones in August. According to Ice Universe, the Korean manufacturer will unveil the new smartwatches as early as the second quarter of 2021, starting in April and ending in June.

The main question regarding the Galaxy Watch 4 and Galaxy Watch Active 4 is whether they will stay on the Tizen software platform or migrate to Wear OS (formerly Android Wear). There have been reports on the Internet that the company is preparing a smartwatch that will use Android instead of Tizen. They even mentioned their code names – Wise and Fresh. Perhaps these are other watch models that will be presented in addition to the Galaxy Watch line, but it is also possible to transfer the Galaxy Watch series itself to Wear OS.

It was also previously reported that the new generation of watches Galaxy Watch 4 and Watch Active 4 will be able to determine the level of glucose in the blood.

So, in the fourth quarter of 2020, the smartwatch market declined slightly on an annualized basis. Analysts attribute this to a new wave of the pandemic, which negatively affected sales. In general, the market grew by only 1.5% over the year.

Not all manufacturers have experienced the impact of negative factors to the same extent. Thus, Apple, the market leader, has increased shipments from 28.4 million units in 2019 to 33.9 million units in 2020, that is, by 19%. At the end of the fourth quarter of 2020, Apple owned 40% of the market. The year before, Apple’s share was 34%. 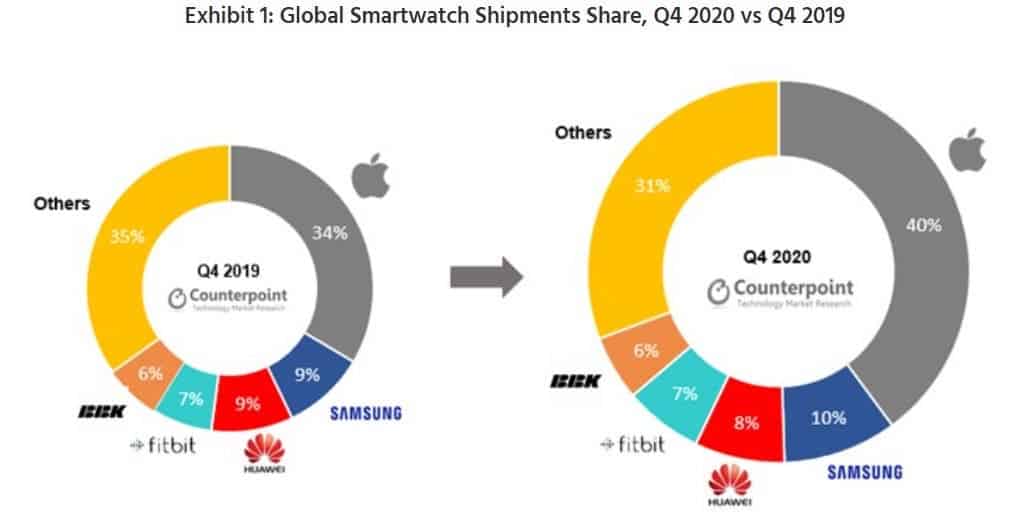 The third place in the quarterly ranking belongs to Huawei. The share of Huawei is 8%, in the fourth quarter of 2019 it was 9%. In 2020, the company shipped 11.1 million devices, increasing shipments compared to 2019, when 8.7 million devices were shipped, by 26%. As a result, at the end of the year, Huawei ranks second.

The top five – for both the quarter and the year – also include BBK and Fitbit. However, they have nothing to brag about: the first one shipped 6.6 million smartwatches in a year, which is 9% less in annual terms, and the second – 5.9 million, which is 4% less. Quarterly, Fitbit holds 7% of the market, BBK – 6%. 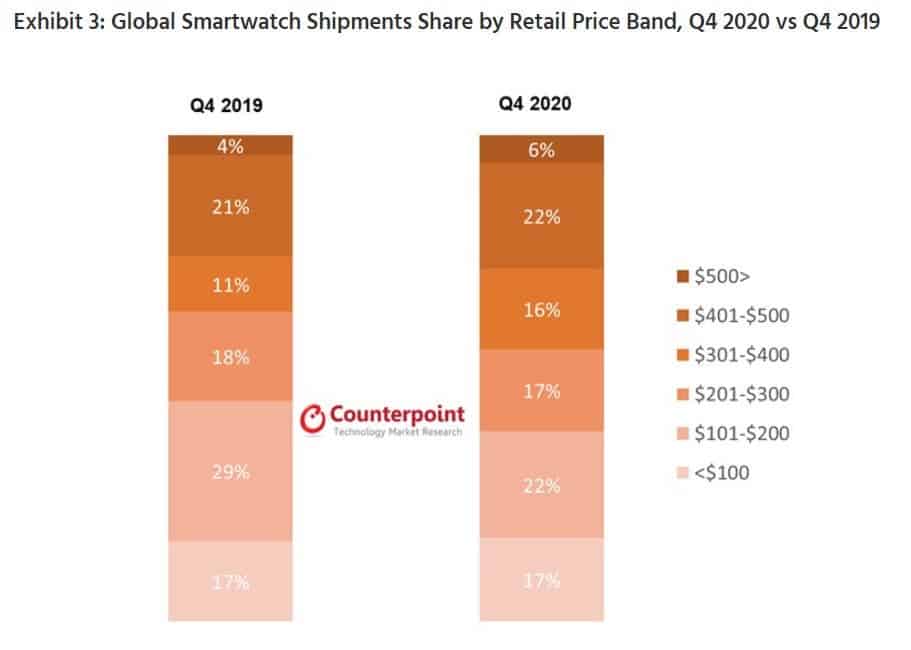 Next Huawei lose more grounds in the Chinese smartphone market