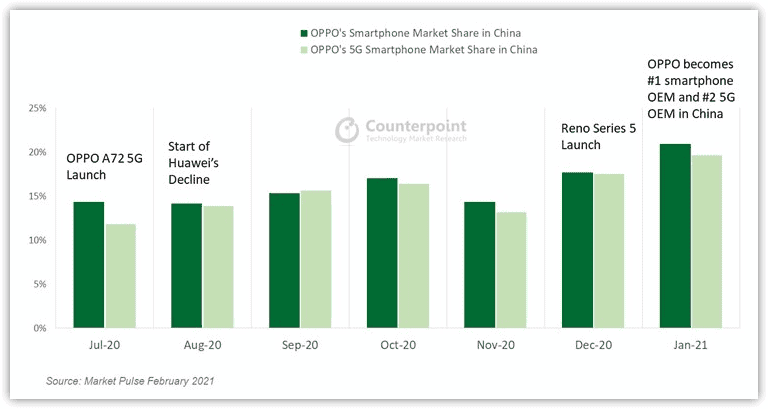 Since August 2020, Huawei’s smartphone market share in China has been on the decline. This is because the company can no longer cooperate with TSMC for flagship chips. This seriously limits the number of flagship phones that Huawei puts on the market. For Huawei, sourcing for 5G devices components without American technology is quite difficult. This is affecting the company because over 65% of devices sold in China in Q4 2020 were 5G capable.

According to Counterpoint Research reports, Huawei is now in joint third position in the Chinese smartphone market. On top of the Chart is neither Samsung nor Apple. Chinese manufacturer, Oppo takes the lead in the Chinese smartphone market. It has a market share of 21% which is a year-on-year increase of 26%. In the second position is Vivo with a market share of 20%. Huawei, Xiaomi, and Apple are joint third with a 16% market share each.

Oppo’s Reno series did the work

Talking about Oppo’s rise, analyst Varun Mishra believes that the repositioning of the Reno series is very vital. Specifically, the Oppo Reno 5 series did most of the work. Mishra explains:

OPPO has been successfully able to reposition its product lines in 2020. The rebranding of the Reno series and launching a more capable device at a lower price point than its predecessor helped OPPO capture the affordable premium segment. The strong momentum of the A series in the mid segment strengthened the product portfolio for OPPO and it was able to cater to the 5G demand in China across a wide price band. This was further helped by the decline of Huawei.

At this point, there is little or nothing that Huawei can do to reclaim its place. Its major challenge is that it is not releasing enough smartphones in the Chinese market. However, the company is planning to re-enter negotiations with the new American government. If this yields a positive result, it may be back on track to reclaim its position.