Since the official announcement of One UI 3.1 software, Samsung has been pushing the rollout aggressively. After rolling out the update to most flagship devices, Samsung has now traversed down to budget and mid-range smartphones. The South Korean giant recently seeded the update to the older Galaxy A50 in India. Well, it’s time for the Galaxy M31 smartphone to taste the revamped One UI based on Android 11.

Galaxy M31 gets One UI 3.1 software update in India! 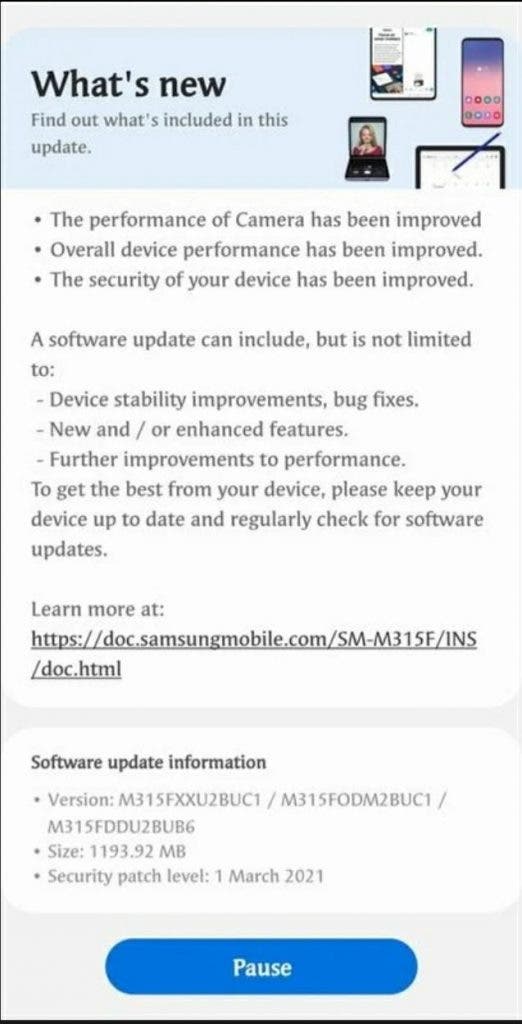 Earlier this month, Samsung brought the Android 11 software to the Galaxy M31 smartphone. Well, it’s time for the owners to enjoy the improved One UI 3.1 software on their device. The new firmware update carries the version M315FXXU2BUC1 and weighs around 1GB in size. As expected, the update also brings the March 2021 Android security patch fixing all known vulnerabilities.

Surprisingly, the changelog also mentions a bunch of few things such as camera improvement, improved device performance, and of course, security. The update appears to be rolling out in India only and we might see more regions joining in soon. If you reside in India, then you might have already received the update notification. That’s not the case? then you might want to check for it manually by heading over to Settings>>Software Update>>Download and Install. Since we’re looking at a major update, we recommend using stable WiFi connectivity to download it.

What does the new update bring to the table?

Just like with other One UI 3.1 running devices, the updated Galaxy M31 should also get the same features. The first thing you’ll notice is a revamped user interface that changes the drop-down notification menu, widgets, and more. Apart from this, the device will now have the ability to remove GPS location data from images while sharing them. With that said, you should also see compatible Google Home smart controls on the notification shade. We’re also looking at an improved clock app along with a bunch of other addition.

For those who’re unaware, Samsung Galaxy M31 was originally launched with Android 10. Since then, it has now been updated to the Android 11 operating system. The device has already received its first software update and owners can expect two more in the future.

Next Galaxy A52, Galaxy A72 new leak reveals Indian pricing