Back in the last month, Motorola introduced the Moto G10 and Moto G30 in global markets. The latter came to India recently alongside a more capable Moto G10 Power. Now, it seems that Motorola is gearing up to introduce a new Moto G smartphone and it will be more powerful than anything introduced to the series until today. The device can be classified as the first Moto G flagship or flagship killer and since it will be placed above any other Moto G device, it will carry Moto G100. According to rumors, this handset will be a rebranded Motorola Edge S with Snapdragon 870 SoC.

Back in the last month, the Moto G100 appeared on the GeekBench benchmark. Its appearance was a solid fact corroborating with rumors about Motorola Edge S rebranding. Today, a new set of press renders emerged revealing the Moto G100 in all its glory. Once again, it is identical to the Edge S, bringing the square-ish camera island in the back.

Since the Motorola Edge S isn’t a new smartphone, we already know everything we can expect from the Moto G100. Under the hood, the phone will carry a Qualcomm Snapdragon 870 SoC. It’s the first time a Moto G smartphone gets a Snapdragon 8xx series chipset. So enthusiasts of the Moto G-series will have a chance to purchase a handset that will feel like a flagship. In China, the device comes in 6GB/128GB, 8GB/128GB, and 8GB/256GB configurations. We’re not sure if the Moto G100 will get all these variants, but we expect at least the basic and high-tier variants.

The Moto G100 will pack a 6.7-inch LCD with a 90Hz refresh rate and FHD+ resolution. Since this is a cost-effective flagship, Motorola had to cut some corners and we can see that the display was one of the casualties. This panel has two separate punch-holes that serve as a home for the 16MP and 8MP ultra-wide cameras. Moving around to the back, we a Quad-Camera setup comprising a 64MP primary, 16MP ultrawide, 2MP, and a 3D ToF sensor. 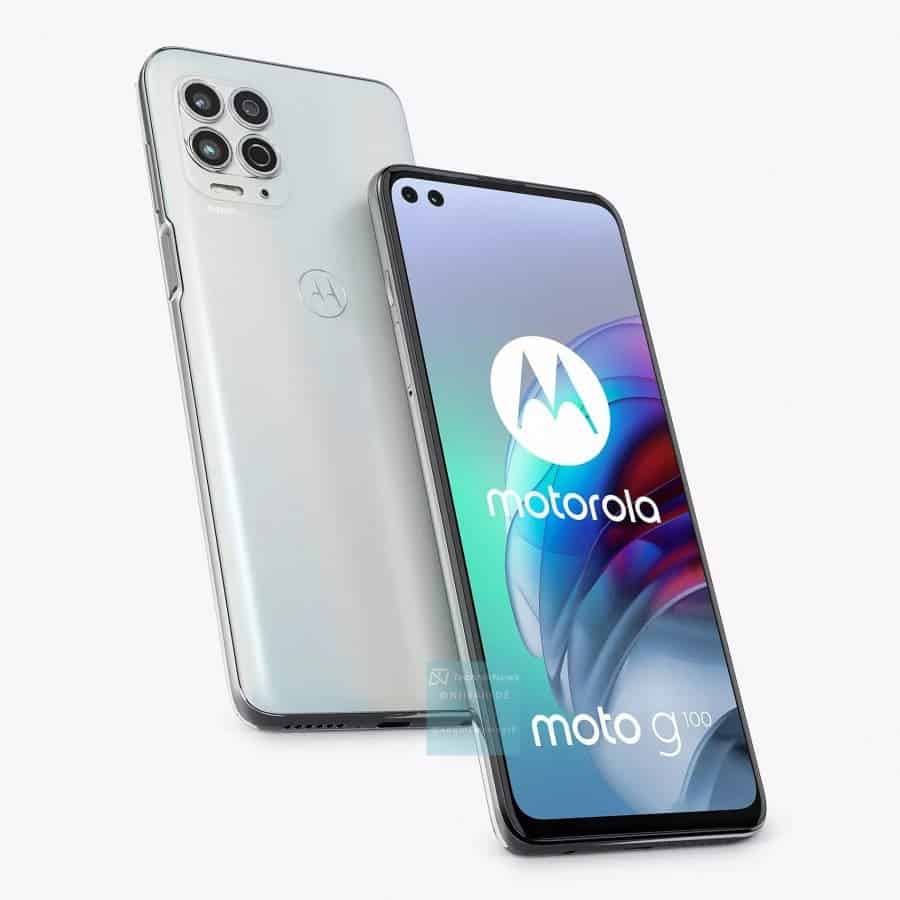 The device also has Wi-Fi 6, Bluetooth 5.1, GNSS, and NFC. Unlike common flagships, it brings a 3.5mm headphone jack. It also has a side-mounted fingerprint scanner. The phone draws power from a 5,000mAh battery with 20W fast-charging technology. It will run Android 11 OS straight out of the box. The renders suggest that the Moto G100 will come in Blue and White colorways and will come with a price tag in the €400-€500 range.